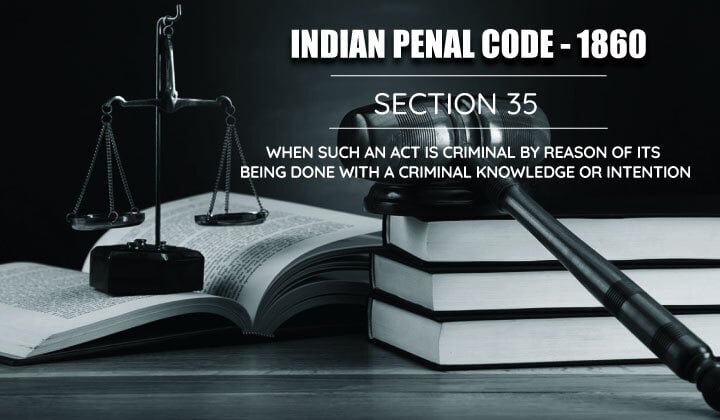 Section 35 of the Indian Penal Code, 1860 simply introduces and establishes the Concept of Similar Intention in the criminal jurisprudence of India.

Section 35 states that - when several persons join in a particular criminal act, with a distinct, but same criminal knowledge or intention, are liable for their acts as they have committed it individually.

What is Similar Intention?

What is the difference between sections 34 and 35?

Section 34 of the IPC talks about 'common intention', while section 35 of IPC introduces the concept of 'similar intention.

The primary difference between both concepts is that, in common intention, the intentions are known and shared. While, in case of similar intention they are unshared, unknown, and distant.

We can understand this through two simple situations:

In 1st situation, A, B, and C has reached a consensus to murder D. Their intentions are known and shared with each other. So, it is an example of Common Intention.

In the 2nd situation, A, B, and C do not know each other at all and they have not ever had an interaction. Their intentions are not shared and known, though it is the same. So, it is an example of a Similar Intention.

Also, criminal knowledge is a condition precedent to Section 35, that must be established while creating evidence under this section.

It needs to be proved that the act which was done has been done with the knowledge that it was criminal or with criminal intent. All people involved in such an act must have criminal knowledge or intention while committing the act

Section 35 of IPC is an auxiliary provision of law and is not of exhaustive nature. So, its classification into watersheds like cognizable, bailable or compoundable purely depends upon the substantive section or the main section to which it is attached or read with.

What is the punishment for IPC 35 Case?

As above stated, the punishment differs with the different provisions attached to sec 35.

How to file/defend your case for IPC 35 offence?

The case under Section 35 will simply be whistled by registering an FIR at the nearest police station to the place of occurence.

When someone is charged with offences u/s 35 IPC or is accused of the provisions u/s 35 IPC, then it is advised that he/she shall hire an expert lawyer who has experience in dealing with such cases.

Facts: In the present case, a petition was filed under Section 482 of the Criminal Procedure Code, to quash the entire proceedings of the Additional Civil Judge. The petitioner is accused No.2 within the said case. The 1st accused was the proprietor and owner of a Kannada Fortnightly Lathi Charge newspaper, which had its huge circulation in the District of Dakshina Kannada.

In reference to alleged defamatory news published within the newspaper, Lathi Charge, the complainant initiated action under Section 200 of Cr.P.C. The second accused contended that it had nothing to do with the news item published, it is the first accused who publishes the said newspaper. The accused no. 2 is a printing press where accused no. 1 gets his newspaper printed. Merely because of the fact that the newspaper is printed in the press, it cannot be said that the offence under Section 499, 500, 501, and 502 read with Section 35, IPC, as alleged in the complaint, would get attracted. Therefore, it was his argument that there are no materials to proceed against the second accused, and taking cognizance of the offence against the second accused is bad in law.

In the cause title of the private complaint, the second accused is described as Proprietor/Managing Director Digantha Mudrana, the name of the proprietor of the said press isn't mentioned. Without mentioning the name of the proprietor, the press can't be arraigned as an accused. He is also the Editor of the said newspaper. If the first accused gets the newspaper printed at Digantha Mudrana, it cannot be said that the second accused can be held responsible for the alleged defamatory news item printed in the said newspaper. No offence as against a second accused would constitute.

Accordingly, the petition was partly allowed by the honorable court and the proceeding against the second accused i.e. Digantha Mudrana was quashed.

Keshub Mahindra Vs. State of Madhya Pradesh (1996): This case is said to be the Bhopal Gas Leakage Tragedy of 1984 which resulted in thousands of deaths and decades of negative effect upon the encompassing habitants.

In that case, Keshub Mahindra (Deputy Chairman of UCIL) was charged under different sections of Indian legal code, as below :

It was contended on the behalf of Mr. Keshub that he was at Bombay during that mishappening and also as usual and wasn't concerned with the day-to-day working of the Plant at Bhopal. So, there was no question of framing charges against Keshub for the aforesaid offences read with S. 35 of the Indian penal code, as there was no evidence for even alleging accusations against Mr. Keshub that he had any criminal knowledge in reference to the mishap that occurred thereon fateful night at Bhopal. it had been also contended that the fees framed against the concerned accused should be quashed, because it lacks legality and reason.

On the opposite hand, it was submitted for the state that, there was ample material produced by the prosecution in support of the blotter which clearly indicated that each one the accused had shared common criminal knowledge about the potential danger regarding the escape of the poisonous gas M.I.C both on the account of defective plant, which was being operated under his supervision and also on account of the operational shortcomings detected by the Varadarajan Committee which was constituted by the govt. of India for inquiry purposes. Also, the report of the Scientific and Industrial Research team had clearly indicated the causes of this tragedy and therefore the defects found within the running of the Plant at the relevant time.

Honourable Court observed and decided that: As far as the accusations against Mr. Keshub Mahindra is concerned, primarily the evidence indicates that Mr. Keshub being at the helm of affairs of the plant , must face this charge for the negligence of their subordinate agents who literally operated the plant on that horrendous night. And for that purpose, S. 35 of the IPC would be clearly attracted against him.
This article on IPC Section 35 was drafted by Mr. Kumar Sonal, BA LLB, 5th-year student, Central University of South Bihar (CUSB).
TALK TO AN EXPERT LAWYER