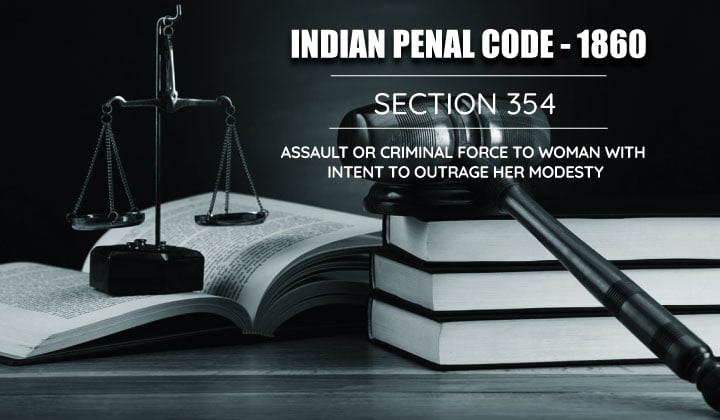 In India, many laws and provisions are made to protect women from any type of domestic violence, criminal force or assault, rape, sexual harassment, and many more. All offenses are listed and punished in accordance with the Indian Penal Code (45 of 1860). IPC Section 354 deals with the specific offenses against women to outrage her modesty with the use of criminal force or assault it is also included in case of sexual harassment.

In IPC section 354 is an offense against women where any person intends or knowingly tries to outrage her modesty with the use of criminal force or assault.

Section 354 is about a commission of an act of assault or use of criminal force on women with the intention or knowledge to outrage her modesty where whoever assaults or employs criminal force to any woman, with an intention to outrage or knowing it to be likely that he will thereby outrage her modesty, shall be punished with imprisonment of either for a term which shall not be less than one year but which may extend to five years, including liable to pay fine.

What are the elements of section 354?

With the detailed analysis of the section, there are key elements that constitute offenses under section 354 to be tried and punished are as follows:

There should be assault or criminal force: Chapter 16 of the Indian Penal Code, deals with the offenses affecting the human body and in that, section 350 explains criminal force, and section 351 explains assault.

Criminal force is explained under section 350 that anyone who uses force with the intention to cause any harm, injury, fear, or annoyance to any person, without permission of that person, and knowing that the force is to create fear and cause harm is called criminal force. Example P encourages T to hit R with a stone without R’s consent. Here, if the intention of P was to create fear or cause injury or harm to R then P is guilty of using criminal force on R

And the Assault defined under section 351 elaborates that any person who makes any gesture, or any action knowing that it will make the other person comprehend the meaning of the gesture is to harm, injury or fear is said to have committed an assault.

Therefore, the common element is intention and knowledge in criminal force and assault. Intention or knowledge of causing injury, creating fear and annoyance can in any person is called the use of criminal force. In assault only the gesture which can make the opposite party apprehend the danger is assault. Thus an offense is no offense if no intention of knowledge is established or inferred.

The wrong should be committed against a woman: IPC section 10 defines a woman as a female human being of any age. This means from newborn to any old age female. The victim has to be a woman as it deals with the offenses against women.

Intention and knowledge must be established: Intention is the basis on which an accused is either convicted or acquitted. It is the essence of the section, where the decision of punishment and validity of the charges are weighed. In this section having knowledge is as good as having an intention to commit the act.

How section 354 constitutes an offense?

The two factors of section 354 that constitute an offense are:

What is the punishment for IPC 354 Case?

Punished with imprisonment not less than one year but may extend to five years with a fine.

How to file/defend your case for IPC 354 offense?

Contact Lawtendo to get in touch with the finest criminal lawyer for filing/defending your case under IPC 354.

Is IPC 354 a bailable or non-bailable offense?

It is a non-bailable offense. The bail is granted at the discretion of the court.

With the help of a few famous judgments, we will try to understand the conviction and acquittal in the case of section 354.

The term modesty was elaborated in the case of State of Punjab vs Major Singh. It was a case where the accused molested a seven and half-month-old female child which led to an injury in the vagina of the infant.

It was held that there is no age limit, no measure of understanding of the offensive act, and consciousness of a female is not necessary to constitute the offense.

Whereas per Bachawat J attributed sex to be the essence of a woman's modesty irrespective of age and every female possesses it from the time of her birth. Therefore under section the guilty intention of the accused is the crux of the matter.” and The reaction of the woman is significant, but its absence is not always determined.

According to Mudholkar J, when any act is done to or in the presence of a woman is clearly suggestive of sex, according to common notions of mankind, that act must fall within the mischief of this section. The case has been an aid in understanding the modesty of a woman and who can be called a woman.

The accused in the public gathering hit the back of a lady I.A.S officer. The aggrieved lodged an FIR. In this case, the court relied on the judgment of  State of Punjab v Major Singh for the test of Modesty, based on which it was held that the action of the accused has the element of sex and has knowingly outraged the modesty of the plaintiff.

Another most cited case is, the case of Aman Kumar Vs State of Haryana, which  court held that “The act of pulling a woman, removing her dress coupled with a request for sexual intercourse, is such as would be outraged to the modesty of a woman, and the knowledge that modesty is likely to be outraged is sufficient to constitute the offense without any deliberate intention having such outrage alone for its object.”

Further, in the case of Devender Singh v. Hari Ram, it is decided that pushing and beating a girl establishes the fact of assault but not the intention to outrage her modesty. Therefore, the proof of guilty intention to outrage the modesty of the woman is prime essence in cases under section 354.

Therefore, it is very essential to establish the knowledge and intention of the accused to constitute an offense of outraging the modesty of a woman or sexual harassment for the accused to be punished under section 354. Because modesty is possessed by every woman by birth, the law has provisions to protect the modesty of the woman of any age, position, and place.