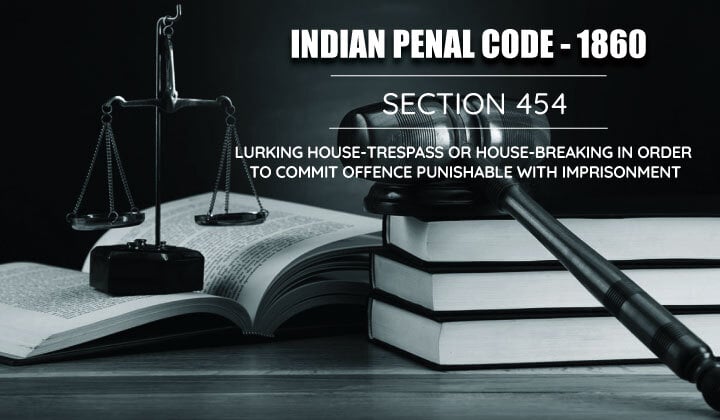 Whoever commits lurking house-trespass or house-breaking in order to commit any act punishable by imprisonment shall be punished with any type of imprisonment for a time that may exceed three years, as well as a fine;

If the intended crime is theft, the sentence may be increased to ten years in jail.

Case -  In the case of  Prem Bahadur Rai v State court held that no charge under Section 443 may be brought unless the accused takes active steps to hide his existence. As a result, the ingredients of a looming house-trespass would be Trespass  House-trespass, Concealing the house-trespass from someone who has the right to exclude the trespasser.

House-breaking: Housebreaking is a more serious form of trespassing that entails forcing access into one's home. Housebreaking can take place in six different ways, according to IPC Section 445:

The first three options involve using a passage that is not normally used for entry or escape, while the last three involve applying force. If the following ingredients are present, the intrusion of any part of the human body qualifies as housebreaking under Section 445 of the IPC

Trespass, House-trespass, The trespasser's admission must be made in one of the six ways listed above.

House trespassing is criminal under section 450 of the Indian Penal Code if the intention of the trespass is to commit an offence punishable by life imprisonment. Similarly, if the house-trespass or lurking house-trespass, lurking house-trespass by night, or home breaking by night is done for the purpose of the offence specified in those sections, those provisions will apply. In certain situations, it makes no difference whether the goal was achieved or not

How to file/defend a case under IPC 454?

In case of section 454 of IPC while the person is defending his case, then he must hire a lawyer and work accordingly upon the case as this case may depend on facts and circumstances of the case,  an expert lawyer will work hard to defend your issue and will almost certainly help you, either by getting you out of the case or by lowering your sentence.

Relevant case laws: Lokesh Kumar v. State (NCT of Delhi), 2019: In this case, the court held that to Section 443 IPC, the prosecution must prove not only that the accused committed house-trespass, but also that the accused took efforts to hide the trespass from someone who has the authority to exclude or remove the trespasser.

The crime of lurking house-trespass was not established because there was no evidence to support the aforesaid. Though it was evident from the facts of the case that the offence of housebreaking under Section 445 IPC, punishable under Section 454 IPC, had been established. As a result, the trial court's order convicting the petitioner under Sections 380 and 454 was without error. Order of conviction does not warrant any interference.

Conclusion: If a person enters a person's property (movable or immovable) unlawfully or lawfully but remains there unlawfully with criminal intent, he or she is guilty of criminal trespass under the Indian Penal Code.

All elements of criminal trespass or house trespass must be demonstrated to be present in the alleged trespass. When a house-trespassing offence is compounded by a forcible entry or exit, or an entry or departure through a passage not authorized for human transit, the offence is referred to as house-breaking. In all three, the intent is a necessary component.

This article on IPC Section 454 is written by Mr. Abhinav Kumar, a Final year student at the University of Petroleum and Energy Studies, Dehradun.
TALK TO AN EXPERT LAWYER