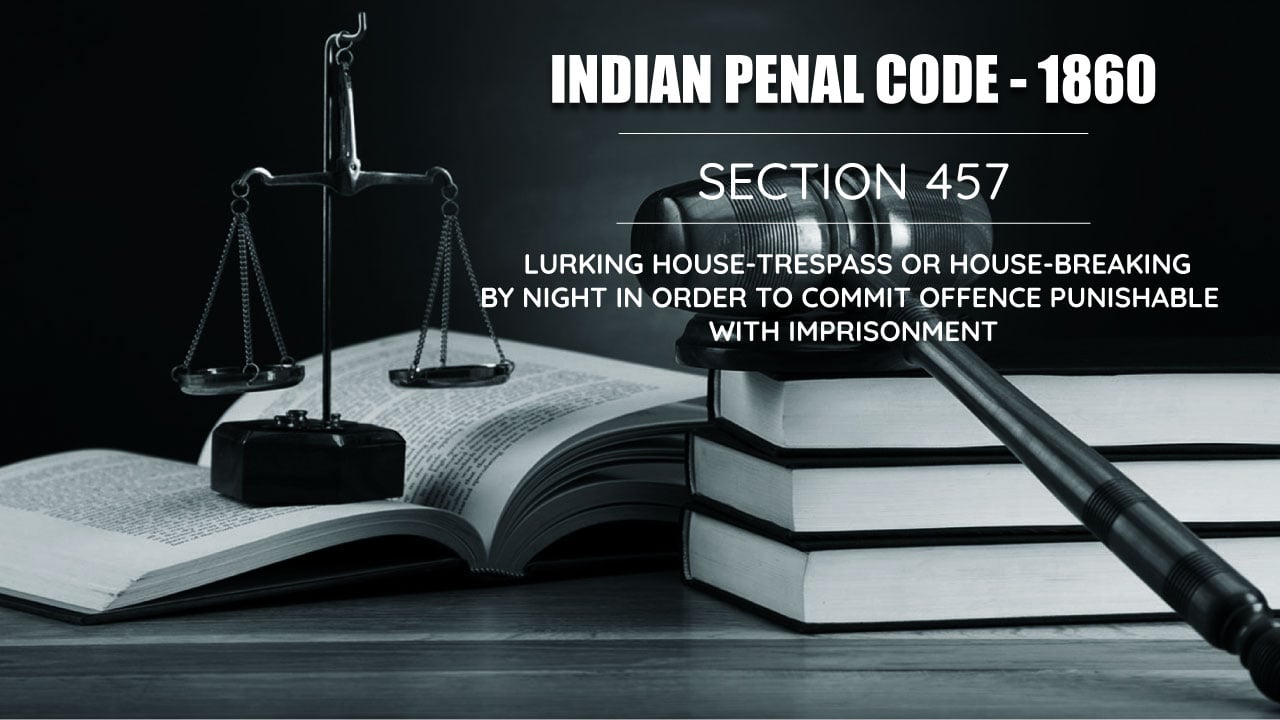 Sec 457 of the Indian Penal Code, 1860 basically provides for offences of house-breaking by night or lurking trespasses. This section applies to classified offences which are punishable with imprisonment.

Particularly, this section states that whosoever commits either lurking house-trespass, or housebreaking by night to commit any offence punishable with imprisonment, shall be punished with imprisonment up to five years, and fine.

The provisions specifically mention the offences of theft in the manner that, if the house-breaking or trespass has been done with an intention to commit theft, then the term of the imprisonment may be extended up to fourteen years.

The ingredients of section 457 are as given below:-

What is the punishment for IPC 457 Case?

As per the provisions of Section 457, IPC, the convicts under this section shall be punished with imprisonment, the term of which may extend to five years. Section 457 also provides for the imposition of fines upon convicts.

Section 457 specifically provides that, during the lurking trespass, if the offence intended to be committed is theft, then in that case the term of the imprisonment can be extended to fourteen years.

How to file or defend your case for IPC 457 offence?

The case under Section 457 will simply be whistled by registering an FIR at the nearest police station to the place of occurrence.

When someone is charged with offences u/s 457 IPC or is accused of the provisions u/s 457 IPC, then it is advised that he/she shall hire an expert lawyer who has experience in dealing with such cases.

Because the offences u/s 457 are cognizable, non-bailable, non-compoundable, and also, the punishment u/s 457 is up to 14 years of imprisonment accompanied by a fine in some cases.

The fact of the case: Akbar Ali was made accused of committing housebreaking at night with an intention to commit theft. Also, Akbar was found in possession of the theft articles and then accordingly charged for offence under section 411 of IPC.

Honourable Court observed that- In order to establish the guilt, the following facts would have been established by the prosecution:-

The court while deciding this case, considered the relevant testimonies of witnesses that, there is no eye witness of the actual theft, neither has the articles been recovered in the presence of the accused and nobody has ever seen or identified the accused entering into the house. On that ground, the court acquitted the accused Akbar Ali.

Akhaya Behera v. the State of Orissa: In this case, it was held by the honorable court that- The provisions of Section 457 will apply only if the offender had tried to conceal his entry or presence in the house. If it has not been so, then the provisions of Sec.457 would not be attracted, though the person may be convicted under some other provisions of law, and only because of the fact that house-trespass was committed during the night or the darkness in the night helped to conceal the presence of accused nevertheless constitute the offence under this section.

State of Gujarat v. Miyama Abraham Mamad: According to the facts of this case, it was alleged that the accused had entered into a house by cutting sheets of the roof and then inflicted knife blows to the deceased which resulted in the death and injury to others. The case was proved by the prosecution beyond any reasonable doubt with the help of cognate evidence and accordingly, the accused was held guilty under sections 302, 324, and 457 of the Indian Penal Code, 1860.