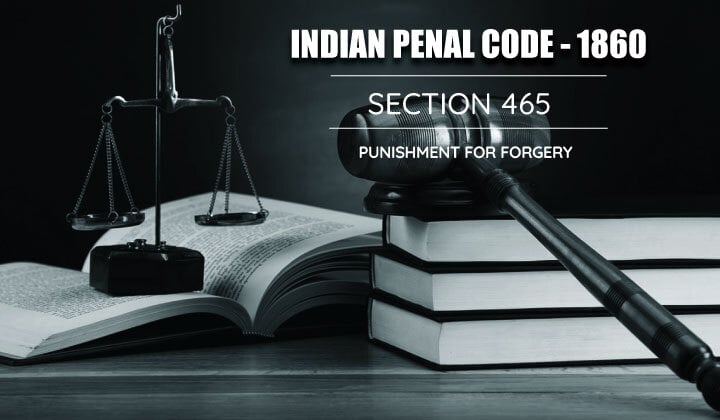 Anyone who goes on to commit the crime of forgery can be punished with imprisonment of either description for a term which may extend to two years, or with fine, or with both.

Bailable Offences are Offences in their entirety that can get a grant of bail, it is purely a matter of right, where the arrested person is released after the bail is granted. It may either be given by a police officer who is having custody of the accused in the course of law. Section 465 of the Indian Penal Code is a bailable offence and triable by any magistrate. Offences that are Bailable are comparatively less serious when compared to non-bailable offences.

What is the punishment for IPC 465 Case?

The Punishment that is emphasized and elaborated in Section 465 of the Indian Penal Code is that anyone held guilty of forgery under this Section could be punished with imprisonment for about two years or in the means of fine, or both of them.

How to file or defend your case for IPC 465 offence?

Filing a case under Section 465 of the Indian Penal Code: A written complaint by a lawyer can be the first point way to start at or have an FIR registered, in any Police Station where the complainant has access to, this records the complaint, to open up a channel to initiate other processes.

To Defend the case under Section 465 of IPC: If the accused has to defend themselves against the accusations raised in the court against them under Section 294 of Indian Penal Code, then primarily he has to hire a lawyer and have them understand the whole process of the circumstances of that case and for the defense of any case which depends upon the circumstances of that case.

A lawyer who is very much capable will attempt to assist you and defend your case in either reducing the punishment or have it totally exempted.

Any famous judgment of Section 465, Indian Penal Code if any?

The grounds under section 463 and 167 of the Indian Penal Code were primarily open to the court to depend upon Section 221 of Cr. P.C. and the person who was convicted with an offence under Section 465 of the Indian Penal Code, which though there was no specific charge for the offence was observed by the learned judge, the judgment which was considered to be offending to common sense and particularly injudicious.

The argument which was supported with the contention that was recorded by the Magistrate was to be restored but with acquittal that was set aside. As an alternative, he primarily contends that the Criminal Appeal in the case, which may be allowed and the case can be remanded to the trial court for a much fresher trial which points to a proper and much distinct charge for the Offence of forgery as given under Section 465 of the Indian Penal Code.

The point that was asserted here was that if the consideration was to allow the appeal which has to be allowed and also whether the accused can simply be convicted for the same offence under Section 463 of IPC and which is punishable under Section 465 of the Indian Penal Code, which was whether the case has to be remanded for a much fresher trial.