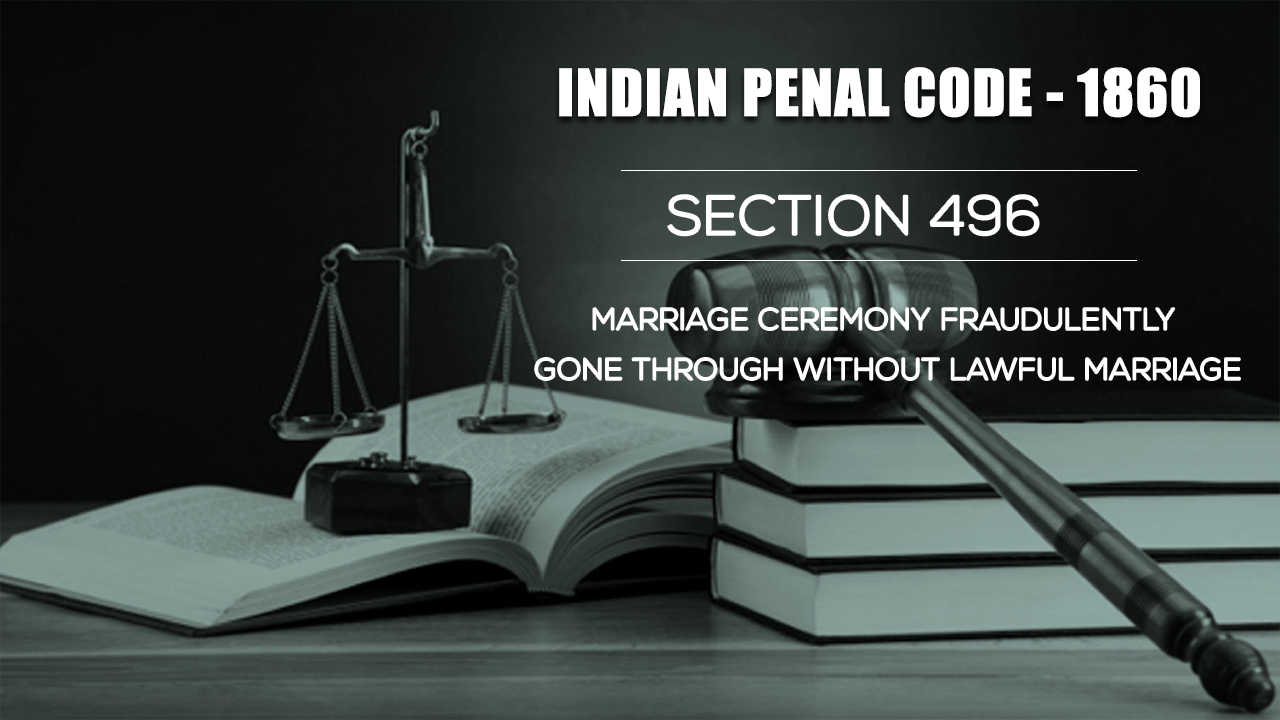 Consider the possibility that your conjugal accomplice is a fake. What move can be made against him/her? Imagine a scenario in which you accept that you are hitched to your accomplice however you are definitely not.

These are a few inquiries that may stress wedded couples. The misrepresentation or trickery by an accomplice in a marriage is considered a criminal offense under the Indian Punitive Code.

Section 496 defines the offence of fraud marriage. A person who with fraud or dishonest intention of knowing to the nature of marriage ceremony as invalid goes through such a ceremony is liable to be convicted under Section 496. Such mock or fraudulent marriages are punished under this Section.

Essential Ingredients: The following elements are essential for constituting the offence under section 496 of IPC:-

Scope: The extent of this Section is restricted to rebuffing a man who with misrepresentation expectation comprised a wedding service that not the slightest bit establishes a legitimate marriage and that causes the other party to accept that a substantial marriage has occurred. It doesn't need living together or sex to occur to finish the offense as needed under Section 493.

In the case of Queen v. Kudum, It was seen by the court that mens rea is the substance of the offense under Section 496. It should be known by the guilty party that the marriage where he/she is entering is an invalid marriage. The information on this reality is fundamental. In the event that regardless, the charge isn't knowing the way that the marriage isn't substantial then he isn't at risk to be rebuffed.

IPC 496 can be tried in the court of Magistrate of First Class by the trial court- Court of a session.

Punishment: The punishment of the offence under Section 496 is given under the same Section. The punishment for the offence is imprisonment of either simple or rigorous nature, for a term of maximum of seven years, in addition to a fine.

Shiekh Altmuddin v Emperor: In the case of Shiekh Altmuddin v. Emperor, where the marriage ceremony which is gone through is invalid by the reason of existence of the previous marriage, then Section 496 shall not be applicable. It is subjected as an offence of bigamy which is dealt with under Section 494 of the IPC.

In this case, the court held that the accused is not liable for the offence under section 496 IPC as the mens rea is an essential element for 496. The accused did not have dishonest intentions.

How can you file a case under section 496 IPC: If there is a violation of Section 496 the concerned victim should first report the same to the nearest police station and lodge an FIR regarding the same without any cost.

Or else for more convenience E- FIR can be filed since Section 496 is a cognizable offence.

Steps for filing E - FIR is as follows - Visit the local or concerned police's official website for instance www.uttrakhandpolice.nic.in Once the website opens, click on the services option.

services option has a drop-down menu will appear and you have to click the nature of your case.

Once the category is selected,  you have to provide the following information:

Lastly, after submission, you have to enter the captcha code on the form for confirmation.

Note - Before submission all the details should be rechecked and ensure that the email id is correct as the FIR for future reference will be sent to this mail ID.

If any substantial evidence is found a charge sheet is prepared by the police. After completion of the charge sheet the matter is pursued as a trial in the court with the prosecution establishing the ingredients of section 496 and if successfully done then the accused may be imposed with imprisonment up to 6 months or fine or both depending upon the discretion of the court.

How can you defend the case under section 496 IPC?

In the case of the accused, the accused can firstly apply for bail through a lawyer and since it is a bailable offence the bail will be granted by the court or the police.

Further, the accused through a lawyer have to defend the matter and prove that there was no intent or belief to spread many dangerous diseases by the acts alleged in the cases.

How can Lawtendo Help you?

Further, the lawyer will draft a petition for bail or for defending the accused in the trial or on behalf of the victim can file a petition for proving the ingredients of section 496 before the judge or provide assistance for filing FIR online.