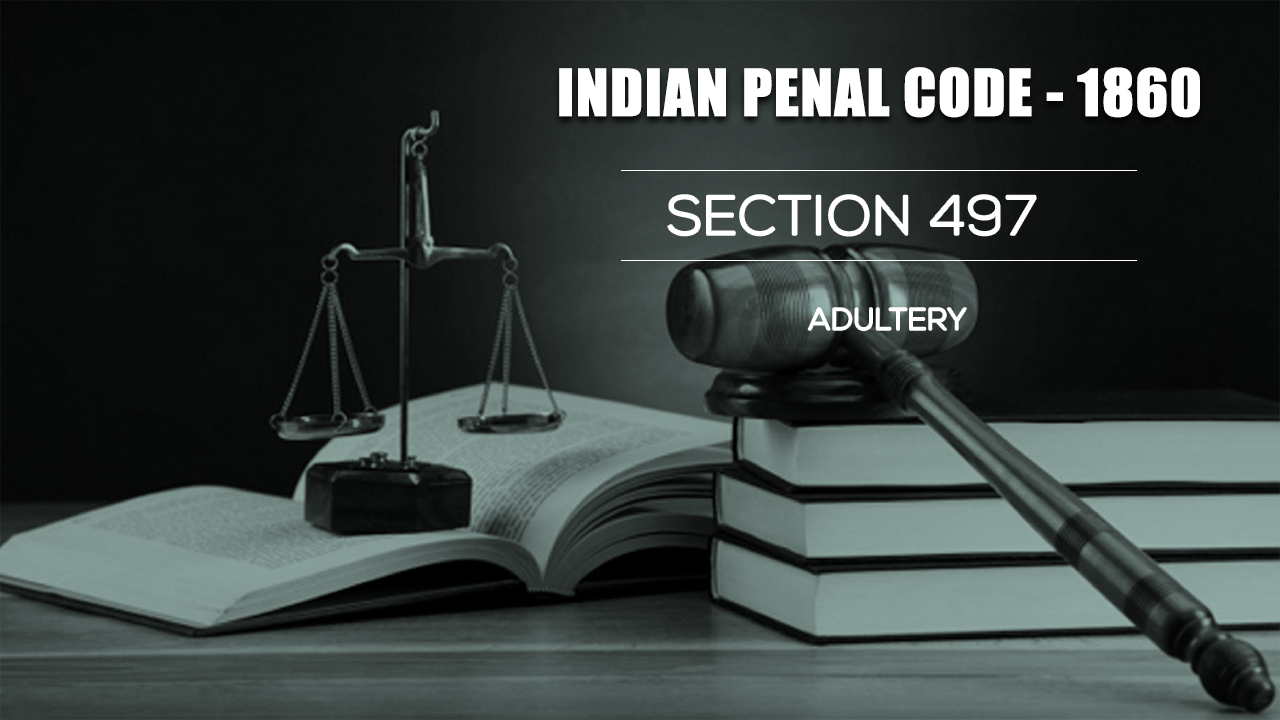 All the provisions for the cases and offences related to marriages are mentioned in Section 493 to Section 498 in the Indian Penal Code, 1860 in Chapter XX.

These offences may be grouped into four categories:

In this blog we shall be dealing with Section 497 which is the offence of Adultery.

Adultery is almost 160 years old law which was made by the British. It is defined in Section 497 of the Indian Penal Code,1860 as when a man (married or unmarried) builds a physical relationship or performs sexual intercourse with a woman, even after knowing about the fact that she is married and is a wife to another man. This situation comes under the preview of Section 497.

The law identifies the married man as the victim because the offence of adultery is looked as an offence against husband. Further, it does not give any right to a woman to prosecute her.

This section had mainly three loopholes.

Yes IPC Section 497 is a bailable offence, which means bail can be obtained as a matter of right.

What is the punishment for the IPC 497 Case?

As long as it is not a rape and the sexual intercourse is with the consent of both the parties, it is a punishable offence and imprisonment of up to 5 years or more, or he might be punished by the imposition of fine or both. In such cases the wife shall not be liable for anything and will not be punished even as an abettor.

But, if the husband of the woman gives his consent for sexual intercourse with another man, no offence lies.

After the declaration of Section 497 as unconstitutional, if someone commits the offence of adultery, it would not be a criminal offence but the party opposite to the one which commits the offence would have the chance to make this as a ground for filing a divorce case.

It is a non-cognizable offence, in which he cannot be arrested by a police officer without an arrest warrant.

Who may file a complaint?

Only a husband of the woman with whom adultery is committed is treated as an aggrieved person and only he can file a complaint. However, in the absence, some other person who had care of the woman on his behalf at the time when such offence was committed may file a complaint on husband’s behalf if the court allows. This is mentioned in Section 198 (2) of the Criminal Code of Procedure.

In this case it was held that Section 497 of IPC criminalised the offence of adultery, but only a man is liable to be punished for the offence. Wife is not treated even as an abettor. Further, if the husband of the woman gives his consent for sexual intercourse with another man, no offence lies. The law identifies the married man as the victim because the offence of adultery is looked as an offence against husband. Further, it does not give any right to a woman to prosecute her.

The crux of the judgement was:

A Constitution Bench of the Supreme Court struck down Section 497. The judgement was delivered by a Bench of Chief Justice Dipak Misra and justices Rohinton Nariman, AM Khanwilkar, DY Chandrachud and Indu Malhotra.

“Adultery can be grounds for civil issues including dissolution of marriage but it cannot be a criminal offence," the apex court said. The Supreme Court declared Section 497 to be arbitrarily unconstitutional in the judgement of Joseph Shrine Vs. Union of India in 2018.The Constitution Bench decided that Adultery (Section 497) should be dropped.

The petition which was filed in the Supreme Court, Section 198 (1) and 198 (2) of Criminal Procedure Code (CrPc), raised the question about why only the man would be punished and not the woman when both are equally responsible for the crime?

The court examined that basically the woman here is the victim. A married woman does not have any power because Section 497 gives the power to the husband to file a case against the man who performed adulterous relationship with the former’s wife but no right given to the woman to file a case in the same condition against the other woman performing adultery with the former’s husband.

Even though this section was initially made because the women were considered inferior in the society and were given much power to speak up. This law was made because the male dominated the society back then. But now, in the 21st Century, the women are considered equal to the men. This law was seeming unfair to the men. Because even if the woman would be at fault, the punishment for the offence of Adultery would be only given to the men as there exists a notion that women can do no wrong and she. The woman involved in the Adultery would not be given any punishment even after having a physical relationship with a man other than her lawfully wedded husband. In this section the married woman was thought of as a subordinate.It was discriminating between the men and women of the society and therefore the Supreme Court scrapped this section and declared it to be Unconstitutional. The court also examined that this right was giving power to the husband to treat his wife like a property. The wife has a life and dignity of her own. So, to maintain that dignity, this section had to be made unconstitutional.

In this case it was mentioned that Section 497 violates Article 14 (equality before law), Article 15 (1) (Prohibition of discrimination), the dignity of women and Article 21 (Right to life), Right to privacy and right to choose. It is opposed to “constitutional morality”.Even Section 198(2) CrPC violates Article 14. The Supreme Court finally held that this section violates the fundamental right, Article 21 of the Constitution of India which mentions about Right to Life and Personal Liberty and Article 14 which mentions about Right to Equality. The Supreme Court released that the society should finally evolve and grow, where the men and women should be given equal opportunities as well equal punishments.

Yusuf Aziz V. State of Bombay, 1954 - The main accused Yusuf Aziz contended the offence of Section 497 that it violates Article 14 and Article 15 of the Constitution. He argued that it creates discrimination between man and woman on the basis of sex because when both man and woman should be equally responsible for this offence of Adultery, only the man was punished and the woman was not even treated as an abettor.

The Court held that the discrimination was protected by Article 15(3) and so not unconstitutional. It held that this section is made to protect the image and position of women in the society.

Sowmithri Vishnu V. Union of India, 1985 – Even in this case Articles 14, 15 and 21 of the Constitution were challenged. But the court again upheld the constitutional validity of Section 497, IPC, 1860.

V Revathi V. Union of India, 1988 – The Court, similar to the above mentioned cases, held that Section 497 IPC is constitutional and valid.
TALK TO AN EXPERT LAWYER