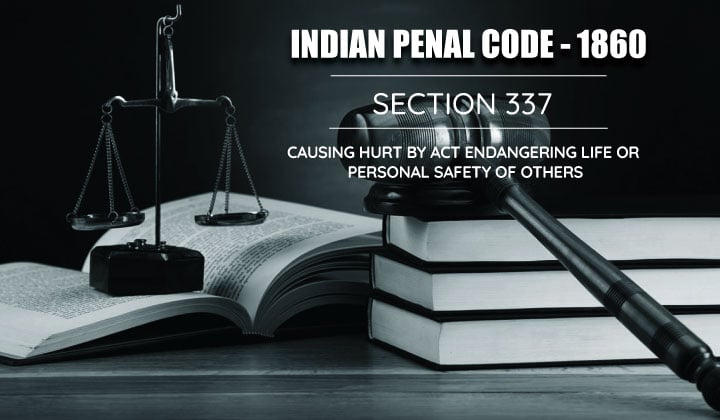 The Indian Penal Code comprises four hundred and ninety-nine sections, some with sub-sections, that are divided into ‘XXI’ or twenty-one chapters. If we go through all sections, we can conclude that the objective of this compilation of laws is none other than to protect, preserve and prioritize the well-being of the citizens of our nation. The aim to uphold the quality of life of each individual spreads among all spheres of their lives, from personal and civil matters like divorce, adultery, domestic violence to matters like defamation or cheating and last but not the least, to incidents where another individual or group of individuals were physically hurt or worse. Our today’s topic is Section 337 of IPC under ‘chapter XVI’ that deals with offences that affect the human body. This section states ‘Whoever causes hurt to any person by committing an act, rashly or negligently, and as a result endangers human life or the safety of others, shall be punished with imprisonment for a term that can extend to the period of six months, or with fine which may extend to five hundred rupees, or with both. Offences under this section are cognizable, bailable, and compoundable by the person who is hurt, by permission of the court.

Section 337 of the Indian Penal Code prescribes laws against ‘causing hurt by the act that endangers life or safety of others. If the rashness or negligence of any person in committing any act, proves to be a threat to the safety or life of other individuals, the crime is punishable under this section. The consequence usually amounts to up to six months imprisonment or a five hundred rupees fine or both depending on the act committed. It falls under cognizable and bailable offence. It can also be compounded by the victim(s) if the court permits.

The ingredients of section 337 are :

IPC Section 377 falls under bailable offences. Bailable offences are usually mild or less heinous compared to non-bailable offences. In matters of such offences, bail can be obtained from the police station from the officer-in-charge. The prescribed bail bond must be executed before the complaint is forwarded to a magistrate.

IPC Section 337 is a cognizable offence. Cognizable offences are those in which the police do not require a warrant or permission of the court in any official way to make an arrest. The offender must be presented before the magistrate within the span of twenty-four hours.

How to file for or defend against charges under section 337 IPC?

Section 337 of the Indian Penal Code deals with cases that involve acts caused due to recklessness or negligence which end up causing hurt and endangering the health and safety of other individuals.  Whether an individual seeks to press charges against someone under this section or finds himself/herself on the receiving end of such charges, it is very important to be thorough with the section itself as presented in the IPC and also equally important is to understand the ins and outs of the court procedure and the real-life implementation of the law.

It is essential to keep in mind that charges under this section demand the occurrence of ‘hurt’ via an act that originates from reckless or negligent behavior. Both factors are very important for the case to stand in court. If no hurt is caused, there cannot be a case under this section, similarly, in cases where hurt has been caused, the prosecutor’s side must prove that the act that resulted in the development of such a situation, was caused as a result of negligence or recklessness on the part of the offender.

(In case death occurs in such a situation, it will fall under section 304-A of the IPC.)

An offence u/s 337 IPC is also bailable, therefore the offender can get bail from the police by executing the bail bond right after the arrest has been processed. There is no case anticipatory bail as it is not required for bailable offences.

It should also be noted that ‘intent’ is not considered under this section. Hence, the court will not consider the reasoning of the defendant behind the act taking place.

Although it is essential for the person involved to know about the section in-depth, it is always recommended to get assistance from professionals.

Is IPC 337 a bailable or non-bailable offence?

IPC Section 337 is a ‘bailable offence’. In such an offence, bail is granted as a claim of right. It can be provided by the police officer that has custody of the offender or by the court. In order to achieve bail, a ‘bail-bond needs to be executed, with or without the presence of sureties. The bail-bond comes with certain guidelines related to the offence such as the offender must be present in front of officials whenever required, etc.

(Please note, the court is within its jurisdiction to refuse bail, even if the offence committed is bailable, if the accused fails to comply with the terms and conditions of the bail-bond.)

The petitioner is accused of the offences punishable under Sections 280, 304A & 337 IPC and various provisions of the Kerala Inland Vessel Rules, 2010.

It is a case where an Individual (A1) was navigating a boat with passengers and while doing so, it capsized in the lake, which resulted in the death of two persons. The boat belongs to the petitioner. The petitioner runs a resort on an island. It was alleged that the accused entrusted the boat with A1, who had no mastery in navigating it and as a result, the speed boat capsized.

The said facts will not invite an offence u/s 280 IPC against the petitioner. The person who was navigating the boat(A1) is the only one who can be accused under Section 280 IPC. Similar is the case with regard to the offences under Sections 304A & 337 IPC also.

In order to invite the offence under Section 337 IPC, there should be rashness and negligence on the part of the accused and the said accused must have caused hurt also. Here in the present case, the petitioner was not even present in the boat and he was not navigating the boat. This is the case with offence under Section 304A IPC where death must’ve also occurred. When the petitioner was not instrumental in navigating the boat and causing hurt or death, the said offences under the IPC will not be considered valid.

Matters being so, the alleged offences against the petitioner under Sections 280, 304A & 337 IPC were quashed by  B. KEMAL PASHA, Judge.

This article on IPC Section 337 was drafted by Mr. Aritra Mishra.
TALK TO AN EXPERT LAWYER