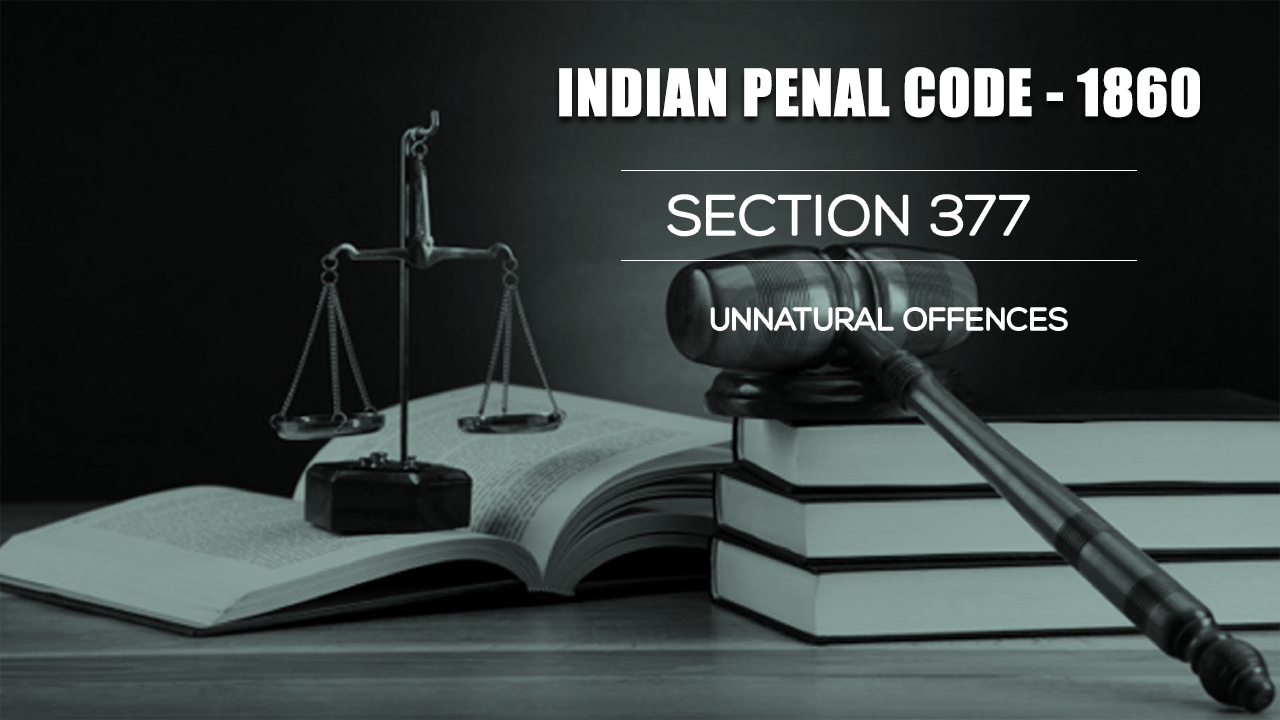 Whoever voluntarily has carnal intercourse against the order of nature with any man, woman or animal, shall be punished with imprisonment for life or 10 years and a fine.

Explaining: Penetration is sufficient to constitute the carnal intercourse necessary to the offense described in this Section 377.

This section provides punishment for terms known as sodomy, buggery, and bestiality. The offense consists of carnal intercourse committed against the order of nature by a man with a man, or in the same manner with a woman, or by a man or woman in any manner with an animal. A in rape, penetration, however slight, is essential. Consent is immaterial in a case under this section. The person who takes a passive part is equally guilty as an abettor with the person acting in the act.

Consensual sex is private between adults of the same sex criminalized vide section 377 IPC is not violated of the fundamental right to personal liberty (Article 21), Equality (Article 14), the and prohibition against Discrimination on Grounds of sex (Article 15), of the constitution Supreme Court - 2014 - Overruled 2018 by a common cause- a registered society.

In Suresh Kumar Koushal v Naz Foundation, AIR 2014 SC 563, given the recognition of the right to personal freedom as a fundamental human right, Naz Foundation, working on HIV/AIDS filed a PIL in Delhi High Court seeking that homosexuality between consenting adults should not be penalized.

The constitutional validity of Section 377

it deserves to be noted that S. 377, which was enacted by the British Colonial Rulers in 1863, was devised to prevent and criminalize homosexual sex, as well as certain consensual heterosexual acts, both of which were formed upon in those days.

It was widely felt that today, such provisions in the penal law of the country are outdated and impose an unreasonable- and unnecessary-restriction on an individual’s freedom, and therefore, ought to be repealed.

In 2001, an activist group, the Naz Foundation, filed public interest litigation(PIL) in the Delhi Court, seeking legalization of such acts between connected adults. In 2003 the High Court passed an order refusing to hear such a PIL, observing that the Naz Foundation had no locus standi in the matter. When the Foundation appealed to the Supreme Court, the apex court held the foundation did have locus standi and remanded the case back to the High Court for disposal on merits.

On July 2, 2009, that is, eight long years after the PIL was filed, a Bench of the Delhi High Court headed by the Chief Justice, Ajit Shah, delivered a historic ruling to this effect that this section, as it stands, violates Art, 14 of the constitution. The court Thus overturned the 150 years old provision that punished consensual homosexual activities between consenting adults,(Naz Foundation a Govt. Of NCT, Delhi,(2009) 160 Delhi law times, 227)

The Delhi Court also observed that its judgment would hold good until Parliament chooses to amend the IPC suitably. Ut also clarified that S. 377 would continue to apply to non-consensual intercourse and intercourse with minors.

When the case reached the supreme court in appeal, the apex court reversed the judgment of the High court and restored S. 377 to its infamous glory. On December 11, 2013, it ruled that S. 377 rightly makes homosexuality a criminal offense. The Bench of the Supreme Court upheld the validity of s. 377 which makes such acts of sex a punishable offense. It also put the ball in the Government’s court, observing that punishment was free to modify or annul the law by situation legislation. (2014 1 SSC 1)

Thereafter, in 2016, a private Member’s bill was introduced in the Lok Sabha by Mr. Shashi Tharoor, in an attempt to decriminalize homosexuality, but the Lok Sabha frustrated this attempt by majority vote against the Bill.

Full justice in the matter was finally  done on September 6, 2018, when the Supreme Court, in a landmark judgment, held S. 377 of the code is arbitrary and unconstitutional to it punishes consensual intercourse between adults, irrespective of their gender identity and sexual orientation(Native Singh Johar & others v. Union of India, 2018 1SCC 991)

In the course of his judgment, Chief Justice Dipak Mishra quoted the German Thinker, Goethe, who had observed.

As Justice Indu Malhotra, the lone female judge on the bench observed, “Sexual orientation is innate to human beings. It is an important attribute of one’s personality. Homosexual and bisexual are natural variants of human sexuality”

The apex court did not, however, strike down S. 377 in its entirety, leaving non-consensual unnatural intercourse and bestiality still punishable under this section.

What is the punishment for IPC 377 Case?

Imprisonment for life or 10 years along with fine.

This is a cognizable offense

How to file/defend your case for IPC 377 offense?

The first and the foremost thing after a particular crime takes place is to go to the local police station either the victim or the relative, friends or family of the victim must file a case, then the next step is to hire a legal practitioner who has a grip on criminal law or have a long term experience on how to move forward with the case. Then with the help of proper evidence the case can be proved, even the bail can also be pleaded depending upon the type of cases, it is upon the discretion of the court whether to grant the bail or not.

Is IPC 377 a bailable or non-bailable offense?

It is a non-bailable offence triable by the Magistrate first class.

Navtej Singh Johar  Vs. Union of India was ruled unanimously that 377 was unconstitutional  in a so-far limit as it criminalizes consensual sex conduction between adult male and female, this judgment was passed on 6th September 2018 Naz foundation judgment
This blog is written by Ms. Sneha Saha, B.A.LLB. (H) - 2nd Year student, Amity University Mumbai, Maharashtra
TALK TO AN EXPERT LAWYER