Mischief Causing Damage to the Amount of Fifty Rupees - Section 427 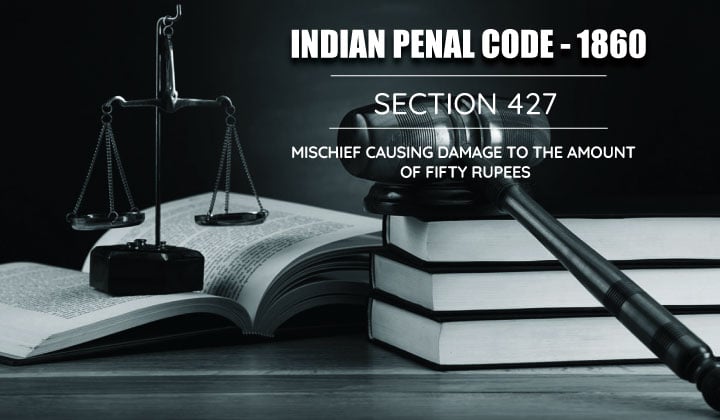 If a person commits mischief and thereby causes loss or damage to the amount of fifty rupees or more, then he shall be liable to be punished with imprisonment up to 2 yrs or fine or both.

Meaning of mischief: Whoever with the intention to cause or knows that he is likely to cause any kind of loss or damage to anyone and causes destruction/change in any property thereby diminishing its value or utility or affects it injuriously, is said to commit mischief.

Ingredients of the offence under section 427 Indian kanoon:

Mischief must be committed as per section 425. There must be a loss or damage worth 50rs or more due to the mischief was done.

The word Mischief in the Indian Penal Code under section 425 states that an act was done by any person who intends to cause or who knows that it may cause any kind of loss or damage to the public at large or to even a single person or even causes destruction of a property which can lead to its destruction or loss in its value.

To hold a person guilty under the offence defined under section 425, it is not relevant whether there is an actual loss or damage to a person or property. The mere fact that the offender had the knowledge that it might cause damage or loss in value is sufficient to book a person under the kanooni Dhara 425.

Let us take an example. In a landmark case, an accused was driving tempo in a very rash/ negligent manner, And he against an AC container and caused damage to the same. The damage obviously turned out to cost more than 50rs and therefore he was convicted under the offence of section 279 and section 427 IPC.

It was also held by the District Court, Delhi that even though the accused did not have the intention of causing damage to the ac container but the mere fact that he had knowledge and sense that his act would cause damage to the car made him liable to get punished under section 427 IPC proving that all the essentials which are required under section 427 to constitute an offence, were fulfilled.

Illustration: If a person ‘Y’ on his own burns valuable security of person ‘X’, with the intention to cause loss to person ‘x’, the person ‘y’ has committed an offence.

Yes IPC 427 is a bailable offence.

What is the punishment for IPC 427 Case?

Punishment for IPC 427 is imprisonment upto 2 yrs or fine or both.

Dhara 427 is a non-cognizable offence.

How to file/defend your case for IPC 427 offence?

In a landmark case, an accused was driving the tempo in a rash and negligent manner and he hit against an AC container and caused damage to the same. The damage caused was for an amount exceeding Rs. 50 and thereby offence punishable under section 279 (rash driving or riding on a public way) and 427 of IPC were committed. It was held by the Saket District Court, Delhi that the accused did not have the intention of causing damage to the vehicle, but he had knowledge that his act of rash driving may cause damage to any person or property. Hence, all the essentials of section 427 of IPC were fulfilled and the accused was held liable accordingly.

The facts of the case are that the complainant was a sole owner of a piece of land acquired by him, registered by way of a proper sale deed being the one and only owner of the same. The opposite party had started dumping iron ore boulder etc endlessly and therefore the value of that land had diminished bcos it was full of waste materials and the capacity of that land to grow crops had reduced. The opposite party had caused a loss of more than 10000rs because of throwing waste materials on that land. The complainant was not able to use the agricultural land for cultivation. A complaint under Section 427 and 447 IPC was made and a judicial Magistrate convicted the opposite party and later even the sessions court affirmed the order.

The advocate for the opposite party contended that the case is a civil dispute and not a criminal dispute as it relates to the title of the land.

“The act i.e. dumping of iron ore over the complainant’s land certainly intimidate him and would cause annoyance so the basic ingredients of the criminal trespass is present in this facts and circumstances of the case so accused is also liable to be convicted for the offence committed under Section 447 IPC.”

Court held that both the sale-deeds were in connection with the same property. It was further held that the basic ingredients of Sections 427 and 447 were satisfied and the petitioner’s actions caused wrongful loss to the complainant and the land became infertile and was not useful for cultivation. It was further held that as the basic ingredients of offence were present in the case, hence merely because there is a dispute in connection with the land, it will not be a civil dispute.

In view of the above, the petition was disposed of and the sentence modified.