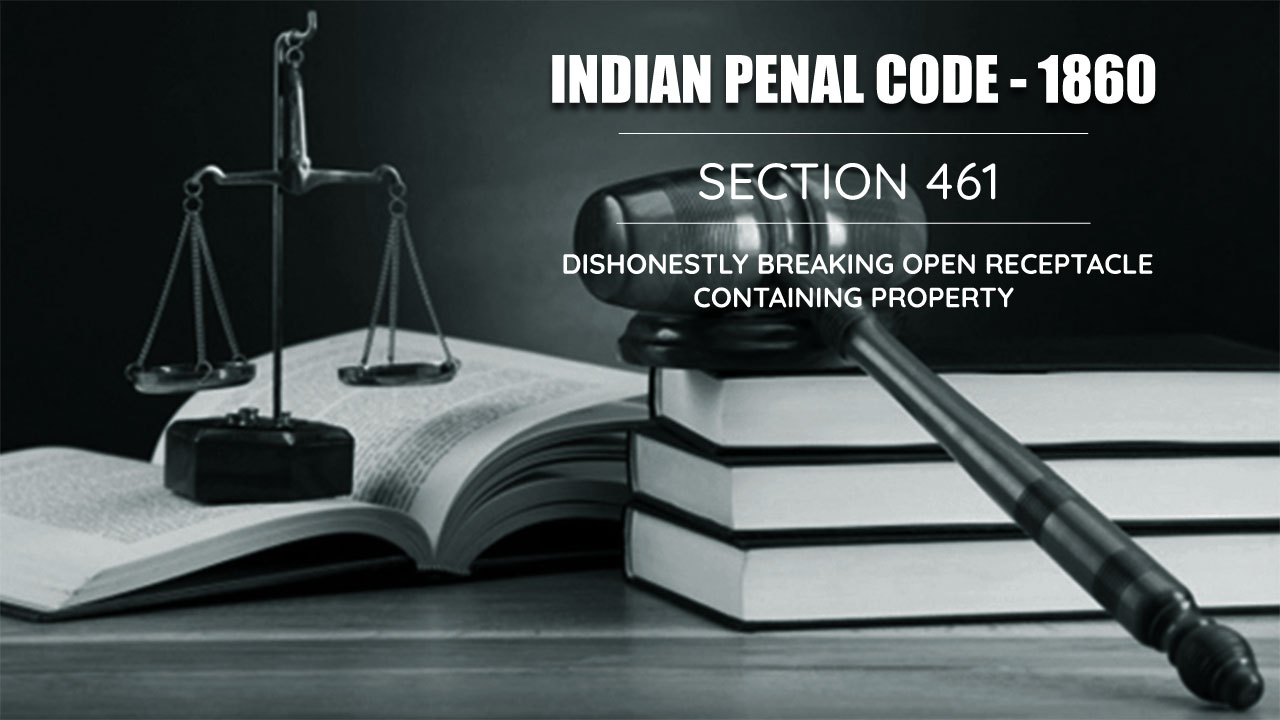 The Indian Penal Code houses laws that aim to protect all spheres of a citizen’s life, that includes his/her personal safety and well-being, protection from any unmerited harm to his/her reputation, and last but not the least, protection against attempts to cause injury to any of his/her’s possessions or property. The topic of today’s article is section 461 of the Indian Penal Code, under ‘chapter XVII” that deals with ‘offences against property. This particular section states that ‘Whoever dishonestly or with intent to commit mischief, breaks open or unfastens any closed receptacle which contains or which he/she believes to contain property, shall be punished with imprison­ment either for a term of two years, or shall be fined, or both.  This offence is non-bailable, non-compoundable but cognizable in nature.

Indian Penal Code section 461 states that if any person breaks open any closed receptacle believing that it holds property, with mischievous intentions, is entitled to be held as an offender and violator of the law and can be imprisoned or fined or in some cases, both. To understand this lawfully, we first need to understand what ‘mischief’ is defined as under ‘chapter XVII’ of the IPC. It states ‘Whoever with intent to cause, or knowing that he is likely to cause, unlawful loss or damage to the public or to any particular individual or group, causes the destruction of any property, or any such incident that reduces its value or utility, commits “mischief”.’

The Ingredients of IPC section 461 :

Such actions, if proven, are punishable under sections 379 and 461 of the IPC.

A bail is a legal term that means the temporary release of an accused on the condition that a sum of money is given harassment. Generally, crimes of a more serious nature are non-bailable and petty cases are bailable. It also depends on the position of an accused, whether he is a public servant or not. IPC Section 306 falls under the category of non-bailable offence. In such offences, bail cannot be granted by the police officials before the accused is placed in front of the court.

Is IPC section 461 cognizable or non-cognizable?

How to file for or defend against IPC section 461?

It is very essential to know in detail about charges for or against IPC 461 whenever an individual finds themselves in the midst of a related incident. The accused must’ve broken into/open a receptacle with unlawful intention or to cause mischief.  The mischief caused must be verified according to its definition in ‘chapter XVII’ of the IPC.  It must be proved that he/she wanted to cause unlawful gain/loss. The accused must also have believed that the receptacle contained property. The defender or the accuser must be aware of all such criteria to stand their ground in court. It is very essential to be thorough with court proceedings and the practical implementation of the law along with its shortcomings and ways one can benefit their agenda. The punishment under this section can be imprisonment up to two years or a fine or both. Therefore, it is always advised to be guided by a professional criminal lawyer when such situations arise.

For further in-depth assistance: Consult an expert criminal lawyer with the help of Lawtendo to file or defend your case for or against IPC 306.

Is IPC section 461 bailable or nonbailable?

Section 461 of IPC falls under the category of non-bailable offence. In non-bailable offences, bail is considered a privilege unlike in bailable offences where bail is considered a right. Therefore, the accused cannot apply for bail in the police station before being presented in front of the court. In such cases, the accused must apply for anticipatory bail before being arrested if he/she has a reason to believe that they are heading down that path. The court will then consider various factors such as the previous criminal record of the accused (if any), the status of the accused in the society, the motive behind the offence, the charge sheet filed by the police, etc. After considering all the aforementioned details of the case, the court will decide whether bail will be granted or not

The prosecution examined ten witnesses and proved documents in the trial court. The properties were also identified during the trial. The accused denied the incriminating circumstances when examined under Section 313 Cr.P.C. He did not adduce any evidence in defense.

The complaint was made without any delay, and before the accused could dispose of the articles, the police could promptly recover everything at his instance under Section 27 of the Evidence Act, 2006. It came out in evidence that the accused was the driver of the tractor of the complainant, and he committed the theft while serving his master as a tractor driver. Though the theft was committed by him while serving his master, the police brought the prosecution under Section 380 IPC instead of bringing it under Section 381 IPC. Though mistakenly stated in the complaint that he had lost 24 sovereigns of gold, he later corrected the versions on verification, that only 21 sovereigns of gold ornaments were lost, and everything was identified by him during the trial. Another circumstance is proved by the identification made by the sniffer dog. The dog was brought to the scene. After smelling the iron stick, the sniffer dog straight away went to the house of the accused, thereby identifying the person. This evidence also supports the prosecution very well. Thus, on an appreciation of the entire evidence, the court found nothing for interference in the conviction made by the courts Crl.Rev.Pet.No. 1556 of 2006 below. The court declared that the accused was rightly convicted by the courts below under Sections 454, 380, and 461 IPC.

As a result, the conviction against the revision petitioner under Sections 454, 380, and 461 IPC of the Judicial First Class Magistrate Court-II, Mananthavady is confirmed, and the revision petition is disposed of accordingly. However, the jail sentence imposed by the court below under Sections 454 and 380 IPC will stand reduced to rigorous imprisonment for one year each. The jail sentence imposed under Section 461 IPC is maintained. The three substantive sentences will run concurrently. The fine sentence imposed by the court below with the default sentence thereon is also maintained. The revision petitioner will surrender before the trial court within four weeks from this date to serve out the modified sentence, and to make payment of the fine amount voluntarily, on the failure of which steps shall be taken by the trial court to enforce the modified sentence, and realize the amount of fine, or enforce the default sentence.

This article on IPC Section 461 was drafted by Mr. Aritra Mishra.