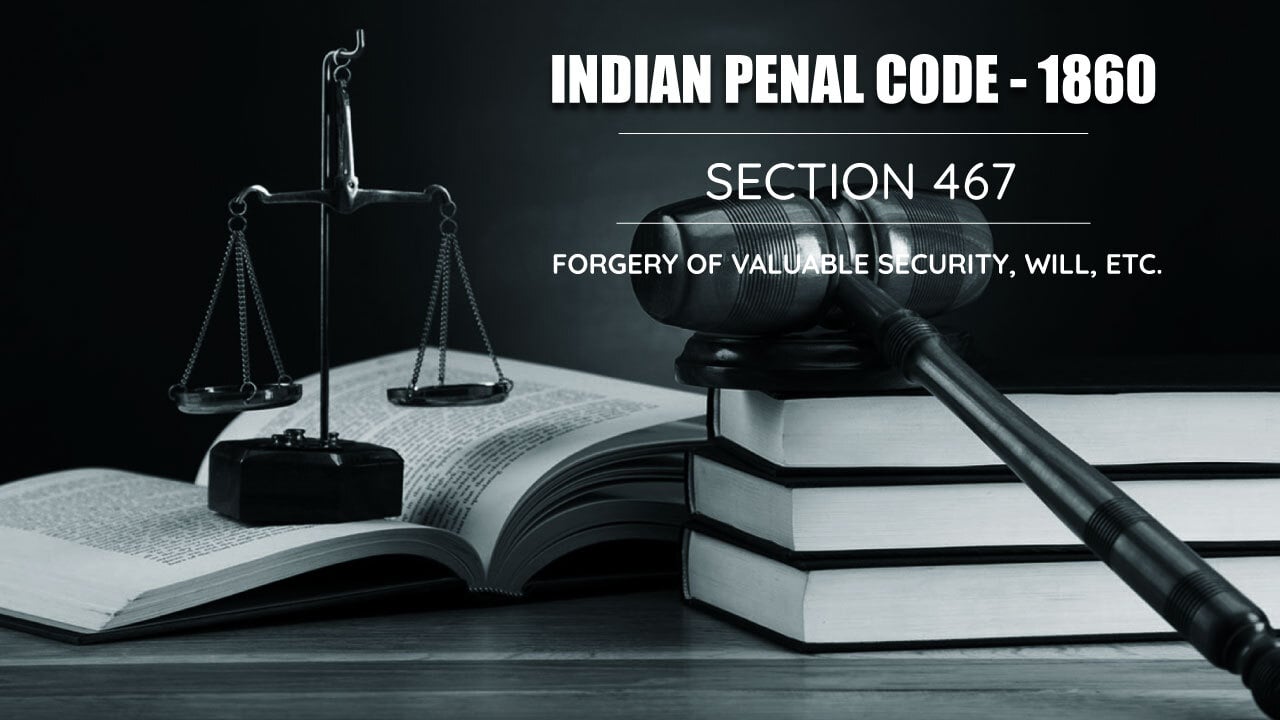 The main objective of laws in any land is to uphold and protect what is morally deemed to be a righteous way of life. This is achieved through laws that guarantee punishment if any are broken. Our nation’s Penal Code acts as a guideline towards enforcing such laws that intends to protect law-abiding citizens against any offence towards their physical and mental health, their reputation, property and important documents, etc. Our today’s topic deals with such a law integrated in the Indian Penal Code ‘chapter XVIII’. We’re exclusively talking about section 467 of the IPC which states ‘Whoever forges a document which can be a valuable security or a will, or an authority to adopt a son, or which gives authority to any person to make or transfer any valuable security, or to receive the principal  interest or dividends, or to receive or deliver any movable property, or any document falsified to be a receipt acknowledging the payment of money, shall be punished with imprisonment for life, or with imprisonment for a term which may extend to ten years, and shall also be liable to fine’. Offences under this section are strictly non-bailable but can be both cognizable and non-cognizable depending on the offence committed.

IPC section 467 is focused on offences that relate to the forgery of important documents like a will or other valuable documents like adoption papers for a son or some documents that enables movable property of value, etc. Offences under this section ensures life imprisonment or imprisonment for a described term or fine or both. Offences under this section merit non-bailable charges which can be cognizable or non-cognizable depending on the crime committed.

Section 467 of IPC falls under the category of non-bailable offence. In non-bailable offences, bail is considered a privilege unlike in bailable offences where bail is considered a right. Therefore, the accused cannot simply apply for bail before being presented in front of the magistrate. In such cases, the accused must   apply for anticipatory bail before being arrested if he/she has a reason to believe that they are heading down that path. The court will then consider various factors such as previous criminal record of the accused (if any), the status of the accused in the society, the motive behind the offence, charge sheet filed by the police, etc. After considering all the aforementioned details of the case, the court will decide whether bail will be granted or not.

Cognizance of IPC section 467 : A cognizable offence is defined as an offence in which the police can arrest the offender without the need of a warrant and the offender has to be presented before the magistrate within 24 hours.

Whereas, in non-cognizable offences, the police need approval of the court or commission of a warrant before proceeding to make an arrest.

As we have established, charges under section 467 can be of heavy consequences, including life imprisonment, and hence all parties concerned should be very well versed with where they stand related to the matter. Both parties should be accustomed to the ingredients required to form a case under this section. By this, the prosecutor can enforce the case or the defendant can find cracks and scrutinize the case formed by the opposition. All involved parties should be aware of the inner workings of the courthouse and the real-life application of the law.

It is a must for anyone dealing with such a serious matter of law that they are always advised and guided by tried and tested law-people at all times to protect their interest.

For further in-depth assistance : Consult an expert criminal lawyer with the help of Lawtendo to file or defend your case for or against IPC 467.

Inder Mohan Goswami & Another vs State Of Uttaranchal & Others on 9 October, 2007: The appellants stated that the trial court was not justified in taking cognizance of the matter when no prima facie case was made out against the appellants. The trial court was gravely mistaken  in not focusing on the complete facts of the case in the proper perspective. The trial court had not properly comprehended the complete investigation reports by two different investigating officers. It was noted that the respondents who had committed the criminal breach by illegally scheming  to sell that part of the land for which an agreement to sell was procured, by abusing the Power of Attorney given to them for some other part of the land. One of the Respondents  was clearly guilty of offences under sections 420 and 467 IPC and the appellants had also filed a criminal complaint against other respondents before the court.

We shall now deal with the ingredients of section 467 IPC which are :

The basic ingredients of offence under Section 467 are altogether missing even in FIR. Hence the appellants couldn’t have been charged under IPC section 467 and the  quashing of the FIR and any further proceedings is merited.

This article on IPC Section 467 was drafted by Mr. Aritra Mishra.