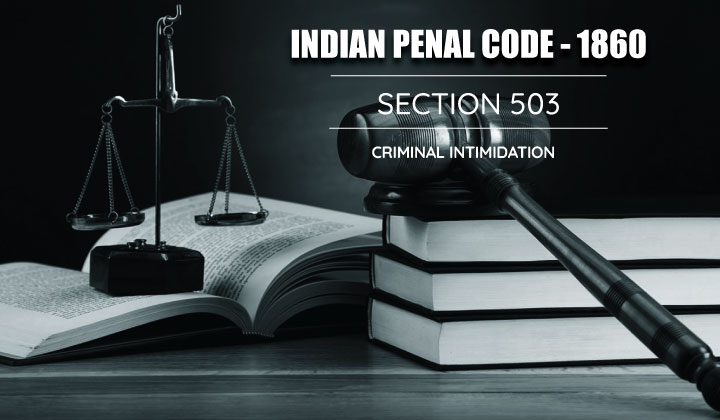 Intimidation, by definition, means intentional behavior to cause a desired reaction from the victim through fear of harm or worse. As this definition clearly states, a phenomenon like this is bound to have criminal implications. Hence, a particular set of laws against such behavior is noted in the Indian Penal Code Section 503 under ‘Chapter XXII’ that exclusively deals with criminal intimidation, insulted annoyance. This section states ‘Whoever threatens another individual(s) with any physical injury or injury to his/her reputation or property, or the same to anyone in whom that person is interested, with intent to cause alarm, or to make them do any act which he/she is not legally bound to do, or to omit to do any act that person is legally allowed to do, execution of such threat, commits criminal intimidation. Section 507 of IPC also deals with something similar, i.e, criminal intimidation by anonymous communication. Section 503 falls under non-cognizable and bailable offence.

Section 503 of IPC consists of laws that prevent criminal intimidation. It protects against any physical injury or any injury to the reputation of the individual or any other individual of importance or to take the initiative of causing them to take any action that they are not lawfully obligated to do via criminal intimidation.  It is classed as a bailable, non-cognizable, and compoundable offence.

The  ingredients of IPC section 503 are :

IPC Section 503 falls under bailable offence. A bail is a legal term that means the temporary release of an accused on the condition that a sum of money is given harassment. The offender can achieve bail from the police station by agreeing to execute the prescribed bail bond before the complaint reaches the magistrate.

How to file for or defend against IPC Section 503?

Section 503 deals with offences that involve criminal intimidation or threat of death or serious harm. Therefore it's a given that charges for such crimes, especially for the latter, can be quite tedious to deal with. Hence, it is always recommended to know about the law and its practical application before getting involved, irrespective of whether to file or defend. A person charged for criminal intimidation can be subjected to two years of imprisonment or can be fined, whereas, any person charged for threatening of death or grievous injury can be subjected to seven years of imprisonment or can be fined or both. On the other hand, the prosecutor’s side needs to prove the fulfillment of certain criteria in court such as proving that the supposed threat occurred and that it occurred with the intent of harm. To summarize, all the parties involved must understand their own rights in order to properly present their case in front of the court.

Consult an expert criminal lawyer via Lawtendo to file for or defend your case against IPC 503.

IPC Section 503 falls under ‘bailable offence’. In a bailable offence, bail is provided as a claimed right. It may be provided by the police officer that has custody of the offender or by the court. In order to grant bail, a ‘bail-bond must be executed, with or without the presence of assurance. The bail-bond comes with certain criteria that need fulfillment, related to the offence.

(Please note, if the accused fails to comply with the terms and conditions of the bail-bond, the court has the authority to deny bail, even if it’s a case of a bailable offence. )

Compoundable crimes are of a less serious nature. In this, the complainant can enter into a compromise with the accused and withdraw the case from the Court. However, such a compromise may be bonafide and the complainant is not entitled to any consideration for doing so. Such offences may be divided into two types based on the permission required by the court for compounding. In case, no permission is needed from the court for compromise, such offence can be adultery, defamation, criminal trespass, etc. Non-compoundable crimes are of a serious nature where no compromise can be made. It can only be quashed. These are generally the cases where the ‘state’, that is the police, has filed the case. Not only the private party but also the whole society is affected by such an offence. All those offences which are not listed under section 320 of CrPC are non-compoundable offences.

Meghana Bhatt v/s. The State, 23rd April 2019: The alleged offence under Section 506 of Indian Penal Code is concerned, the case of the second respondent is that on tenth may twenty-sixteen(10-05-2016), and priorly, the petitioner had sent messages to him threatening not to marry anyone except the petitioner. This statement is contradictory to the earlier statement made in the complaint that till tenth July twenty-sixteen(10-07-2016), they were in love with each other. Under the said circumstances, even if it is assumed that there were exchanges of messages between the involved parties, it was sent during the period when both the involved individuals were continuing their relationship based on the promise of getting married. Apart from that, even if it is considered that the existence of such a threat by the petitioner is true, it only goes to show that as on that day, the petitioner was intending to marry the second respondent and did not want him to get married to any other individual. Therefore the alleged threat cannot be sustained as an offence u/s 506 IPC. In order to form an offence under Section 506 of the IPC, the accused should commit criminal intimidation within the meaning of Section 503 Indian Penal Code. Section 503 IPC defines criminal intimidation as :

‘Whoever threatens another individual(s) with any physical injury or injury to his/her reputation or property, or the same to anyone in whom that person is interested, with intent to cause alarm, or to make them do any act which he/she is not legally bound to do, or to omit to do any act that person is legally allowed to do, execution of such threat, commits criminal intimidation.

This beautiful article on IPC Section 503 was written by Mr. Aritra Mishra.
TALK TO AN EXPERT LAWYER