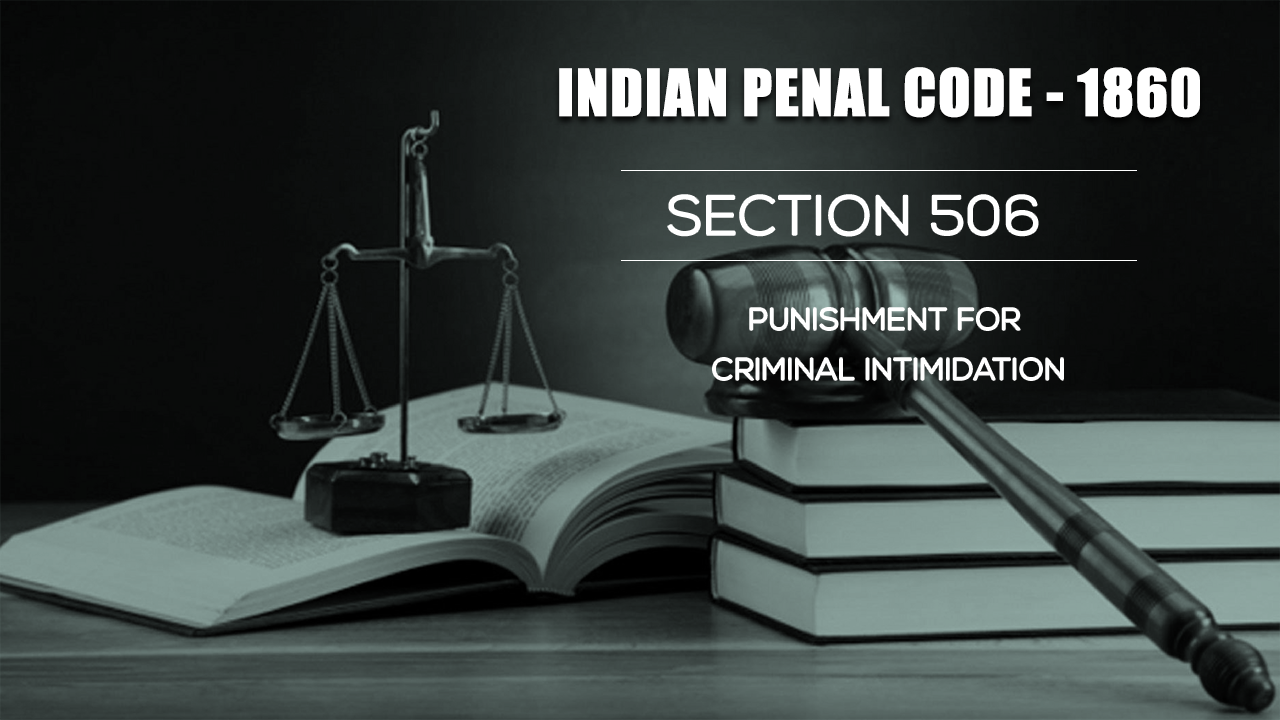 The Indian Penal Code has specified rules and regulations which contain justice against any kind of activity which is treated as illegal or offensive under the eye of law. There are very strict punishments granted under this code. Such code has been constituted by keeping in mind all the personal laws as well as stating that the rule of law is equal for all. Just as murdering or hurting someone is a crime under the law, threatening to kill is also considered a crime under the Indian Penal Code.

Criminal Intimidation means any act that prompts an individual any kind of fear, injury, or damage. It includes doing such acts deliberately and with a motive to build fear in the mind of the other individual in a view to insert a feeling of fear in his mind for fulfilling any kind of personal motive.

According to the Indian Kanoon, Section 506 IPC is a provision stating the following:

The punishment for the above-mentioned criminal intimidation is mentioned in Section 506 of the Indian Penal Code.

For eg. A has an affair with B. Later on, B asked her to give him money. A refused. Later, in order to receive the money, B starts threatening A that he’ll publish all their pictures on social media. This activity if done would cause hurt A mentally and hence damage his/her reputation in society. Here, B has committed criminal intimidation under Section 503 of IPC and punishable under Section 506 of IPC.

Registration of Complaint under Section 506 IPC

In order to register a case, register an F.I.R in the nearest police station and let the police examine the same by conducting any kind of investigation which is required.

After that, take the copy of the charge sheet and file the same with the magistrate of first-class

Once, all the formalities are complete and the magistrate is satisfied, then he shall issue summons to the accused. After this, the court proceedings shall begin.

In order to defend the case, one must understand that the simple demonstration of mishandling an individual in dirty language doesn't fulfill the elements of the offense of Criminal Intimidation (Sec 506 IPC)and hence can be used as a defense.

Get in touch with the best Criminal Lawyer

Such a threat liable under Section 506 of IPC is a bailable offense. But, if such an offense causes the death of the person or causes any kind of grievous hurt to that person, then such an act is not bailable.

What is the punishment for IPC 506 Case?

Any person held guilty will be charged with imprisonment of one or the other duration for a term which may Increase to seven years, or with a fine, or with both.

How to file/defend your case for IPC 506 offense?

Steps for Filing the case

Step 2: Take the copy of the charge sheet and file the same with the magistrate of first-class

Step 3: Magistrate shall issue summons to the accused and the trial would start.

Step 1: Gather every strong evidence against that person whether it be in writing, any kind of recording, any document, and so on, and present the same before the trial court.

Step 2: Declaration of no intention to hurt the opposite party. Even the Supreme Court has held in leading case law that mere use of words to threaten someone shall not amount to a crime under Section 506 of the Indian penal Code.

Step 3: When proved not guilty, the aggrieved party has the right to file the suit against the opposite party for defamation.

In this case, the court held that the danger should be with the aim to caution the complainant to make that individual do or avoid accomplishing any work. A simple articulation of any words with no goal to cause caution would not be adequate to get the utilization of this part.

In this case, the court stated that if a person enters a house with a knife with an intention to rob and hence threaten the owner, then he shall be punishable under Section 506 of the Indian Penal Code.

The accused was asserted to have contacted the hand of the female prosecutor who was a visually impaired young lady, when she was sleeping, took out the blanket and put his hand in her dress. He threatened to slaughter her in the event that she unveiled his name. In any case, the female prosecutor yelled because of which her folks woke up. The High Court sentenced the accused.

Lawtendo has around 15000+ legal advisors across India on our foundation. Lawtendo endeavors to encourage cost-productive and quality lawful support of our customers.