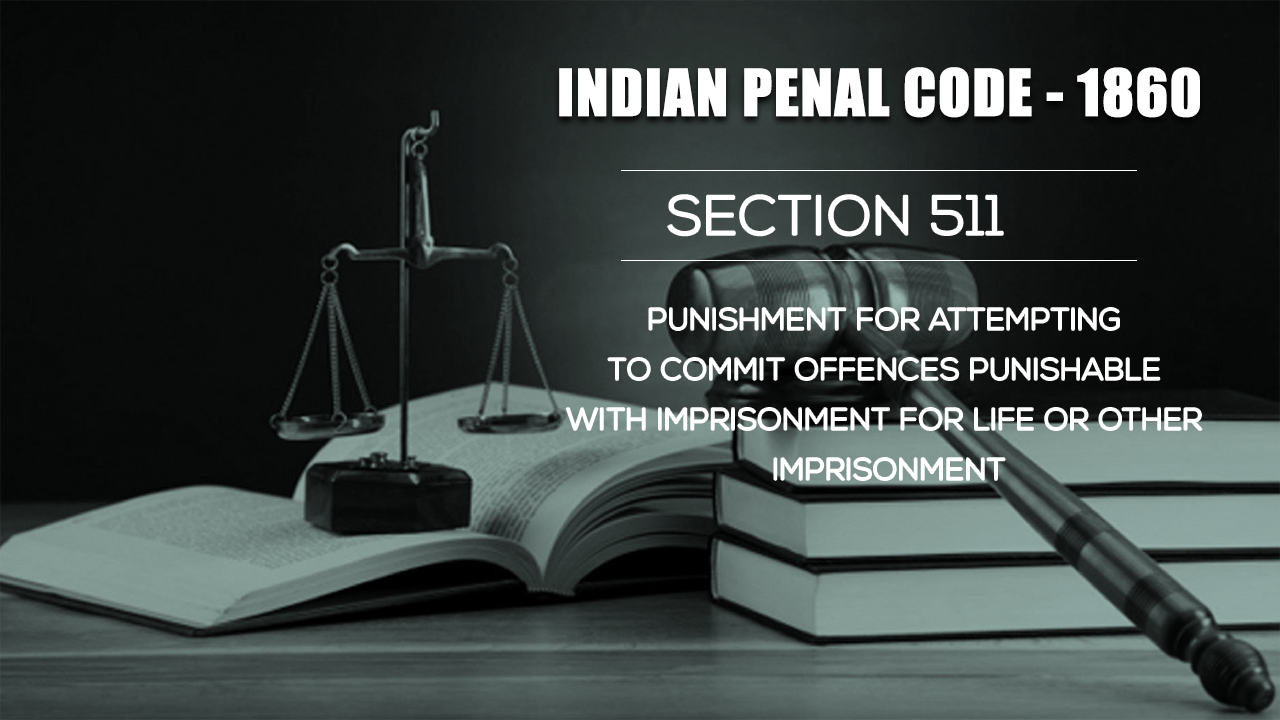 The law is created not only to punish the criminal and illegal act done with criminal intent but also for the preparation and its very attempt to cause harm to another human or damage to property. Section 511 tries to punish the accused for attempting to commit an offense that has punishment prescribed as life imprisonment and any other imprisonment, or fine, or both. This makes the attempt to commit a crime an offense in itself. It is a section that tries to punish a crime that was either frustrated or interrupted due to unforeseen events or failed in its attempt to give an object to the crime. The nature of the offense decides if the offense is bailable or non-bailable, whether the court takes cognizance or not.

Section 511 of the Indian Penal Code punishes attempting to carry out offenses, which has prescribed punishment of imprisonment for life or other imprisonments. The Section provides for punishment for which there lies no express provision in the code.

If an attempt has been made to commit an offense that is not mentioned in the code, the person doing such an act will be punished under Section 511 of the Indian Penal Code, also the punishment of imprisonment may extend to one-half for life imprisonment or with a fine or both.

The nature of Section 511 of the Indian Penal Code is cognizable and non-cognizable and shall be either bailable or non-bailable depending upon the offense.

What is the punishment for IPC 511 Case?

How to file/defend your case for IPC 511 offenses?

How to file: In a situation, where the offense has been committed against any person, that person could either make a formal complaint to the magistrate or in the nearest police station where the commission of such offense took place. In such a manner the initiation of the proceedings will be undertaken by the state and therefore, it will be considered as an offense not merely against the person but an offense against the society.

How to defend: In a situation, when the offense has been committed by you or any other person, the first response of such action would be an FIR or a formal complaint before the Magistrate of the competent jurisdiction under the procedural law. After the facts have been laid down, you or the person would receive a summons before the court as to whether he has committed such offense and thereupon the court will give the opportunity to such person to file the documents and evidence to counter the claim of the aggrieved party.

Upon hearing both the parties the competent judge is to decide, whether the accused has done anything against the provisions of the law made and pronounce a judgment accordingly.

In this case, IPC section 304 B was read with section 511, it was held that when the act prescribed the punishment for the offense then the accused cannot be convicted under section 511, as in order to commit an offense under Section 511, the person has to fulfill two ingredients, which are:

Thus, “attempt” on part of the accused is the essence of the offense under Section 511.

The supreme court has elaborated and enlarged the scope of the term ‘attempt’. It describes an attempt to be a single act or series of acts that if it remains uninterrupted then such act or acts leads to the commission of a crime. So the attempt is more of an act post preparation and only to fall short of accomplishment of the desired outcome. Therefore it has all the essence of the substantive crime. The attempt of offense is to be distinguished from an intention to commit it, and from preparation made for its commission. Only having an intention to commit an offense, but not followed by any act, cannot constitute an offense. The will is not to be taken for the deed unless there be some external act that shows that progress has been made in the direction of it, or towards maturing and affecting it. The intention is deduced from the choice of conduct of the accused towards the commission of the act to commit an offense. The preparation consists of devising or arranging the means or measures required for the attempt to commit the offense. Preparation differs largely from an attempt because it is a direct movement towards the commission after preparations are made.

The distinction between preparation and an attempt is blurred and it has to be decided on the facts of each case individually. The degree of determination is greater in an attempt as compared to preparation.

Therefore, it is important to prove the attempt was made with the intention to accomplish the planned offense, however, an attempt can be a single act or multiple acts that are required to commit an offense with criminal intent. An attempt to carry out an offense is punished with imprisonment, a fine, or both to deter people from taking a criminal route to accomplish illegal gratification.