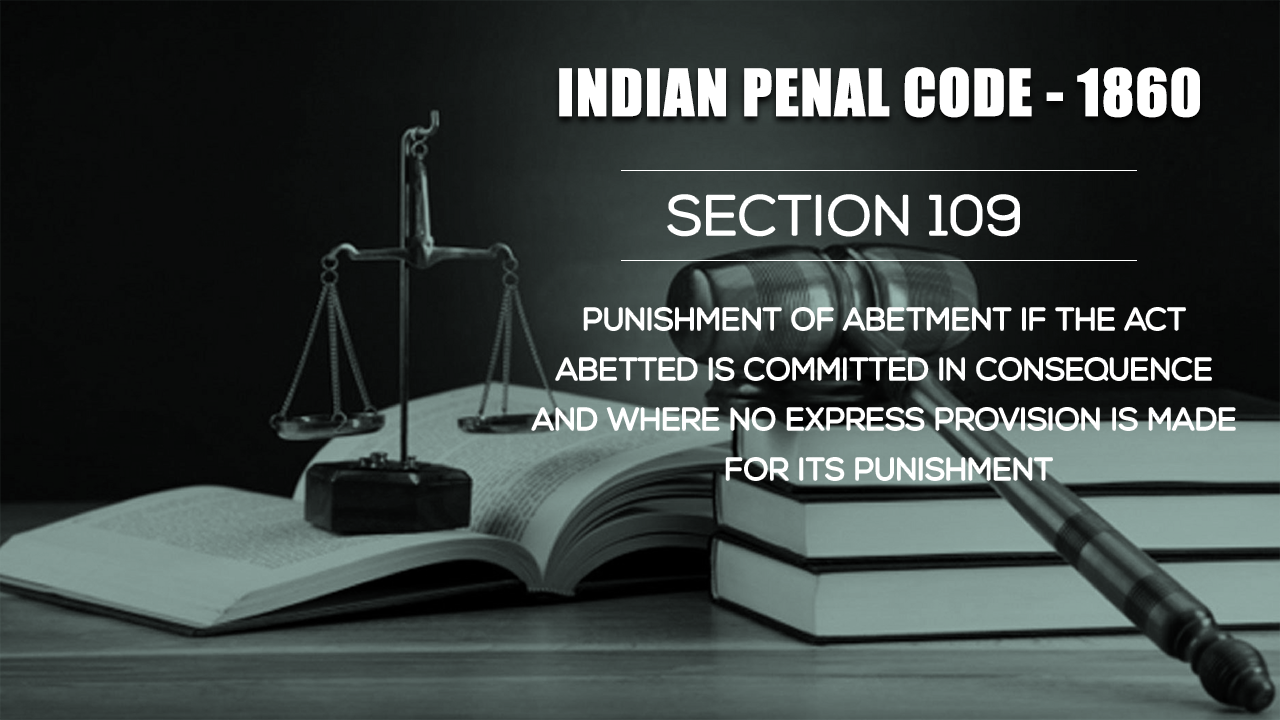 The term abet signifies that ‘Abet’ helps, supports, encourages, assists another person to do something offensive or commit a crime. Abetment is defined Under section 107.

There is a clear specification under section 109 of the Indian Penal Code that if there is no specific provision of punishment provided with the abetment of an offense then that particular offense shall be punished with the original punishment of the offense.

If A commits any act of abetment against Z then the victim Z can go to the police station and file a complaint against the A the charges will be count under the offense section 109 and the punishment for this would lie as same mentioned in the offense committed.

Note: A person might not be necessarily involved in the case of actus reus but the conditions of men’s rea are present  or involved for example instigating, engaging, or any kind of intentional aid will be punishable under the Indian law of abetment

In a bailable offense, the grant of bail is a matter of right. the right may be either given by a police officer who is in the custody of Accused or by the court holding discretion. The accused may be released on the execution of a “bail bond”, with or without sureties.

In a non-bailable offense, there is no matter of right in the grant of bail but still, the accused can apply for bail with suitable causes it is upon the court to grant it or not.

The nature of offense, i.e. bailable, non-bailable, under Section 109 depends upon the nature of the offense committed under the Indian Penal Code.

What is the punishment for IPC 109 Case?

Some offense in which the police officer has no right or authority to arrest without a warrant falls under Non – cognizable offense.

How to file/defend your case for IPC 109 offense?

The first and the foremost thing after a particular crime takes place is to go to the local police station either the victim or the relative, friends or family of the victim must file a case, then the next step is to hire a legal practitioner who has a grip on criminal law or have a long term experience on how to move forward with the case. Then with the help of proper evidence the case can be proved, even the bail can also be pleaded depending upon the type of cases, it is upon the discretion of the court whether to grant the bail or not.

A consumer can hire a lawyer through Lawtendo as it provides the best of best lawyers, who can guide laymen to a successful way out, court procedures often seem very entangled but lawyers here will make the process seem very simple and easy much comfortable than rolling into court premises in search of good and reputed lawyers, everything here is strategically planned and giving satisfactory service to the consumers is our main motive. Lawtendo is a law-tech company that has around 15000+ lawyers across India on our platform who can help you file/defend your case for IPC Section 325. Lawtendo aims to facilitate legal services/advice provided to the clients are cost-efficient and quality service. You can contact us at +91 967133666 or [email protected].

Is IPC 109 a bailable or non-bailable offense?

The nature of offense, i.e. bailable, non-bailable, under Section 109 depends upon the nature of the offense committed under the Indian Penal Code.

One of the landmark cases of Abetment to suicide is:

Sanju vs. State of Madhya Pradesh: There was a heated argument between husband and wife and the husband told him to “go and die” and the wife committed suicide after2 days and also had left behind the dying declaration.

Judgment: The judges gave the judgment that mere pronouncing of the word “go and die” doesn’t fall under any kind of abetment rather it also doesn’t promote men’s rea which has to be necessarily present. Moreover, the suicide was made exactly 2 days after the argument hence it indicates that the suicide was not the direct result of the fight, therefore the husband cannot be liable for the suicide of his wife in any form of abetment