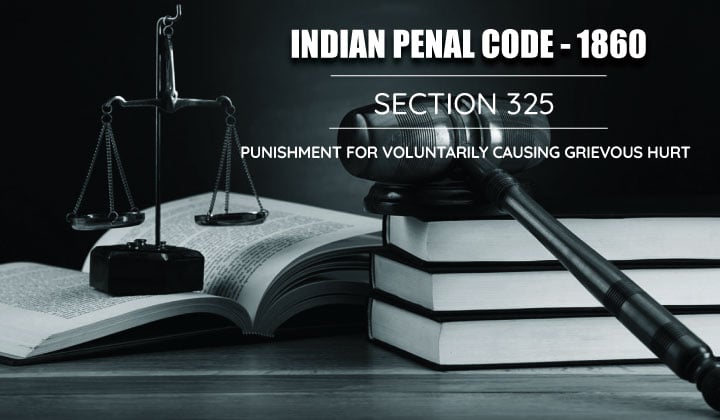 We keep hearing about physical fights between people on roads, railway and metro stations, malls, and sometimes they turn very serious and one of the parties or even both end up getting some grievous hurt. If there is a minor bruise here and there, it is not much of a problem, but it is an offence if the wound is deep or there is some sort of permanent damage done to the body which might be curable but does leave an impact for years to come or for a lifetime. It is an offence under Section 325 of the Indian Penal Code. But there are certain laws that define the punishment according to how atrocious the wound or the injury is. Different sections of the Indian Penal Code deal with different levels of injury caused by a physical fight.

Section 323- When the fight leads to a little bit of swelling (which is the result of an infection or an injury), IPC Section 323 is applicable. The punishment of this section is either imprisonment for a year or a fine of up to a thousand rupees or even both.

Section 324 - When the fight involves some dangerous weapons through which one of the parties ends up getting an injury or cut as deep as half an inch or an inch, on any of the body parts, IPC Section 324 is applicable. It is also applicable when some kind of corrosive substance is used which is capable of causing damage to the human body when inhaled or swallowed. The punishment mentioned in this section involves the imprisonment of up to 3 years or a fine or both.

Section 325 - Section 325 deals with ‘Punishment For Voluntarily Causing Grievous Hurt’. This Section is applicable when someone intentionally does harm to the other person. The harm should be serious, which leaves an impact on his body throughout his lifetime or affects his future like fracturing a bone, misplacing a bone, and so on. The offender must have the knowledge that his act might also lead to the death of the victim and still goes ahead to perform the act intentionally. Those cases would not come under Section 325 which are genuinely caused by mistake and without any intention to harm. This crime comes under criminal law. When the hurt is grievous in nature- fracturing a bone of the victim, to deprive him of his strength, damaging the eyesight, to impair or deform the head or the face, broken tooth, or even when due to the injury the victim has to be in severe pain thereby making him unavailable to his day to day work.  The punishment for the offence which comes under this particular Section is imprisonment of the culprit or the offender.

Nature of offences under Section 325: It is a cognizable offence. A cognizable offence is one in which the police officer may arrest the accuser without a warrant. It is also a compoundable offence with the approval given from the court, which means that fine or imprisonment or even Both are given as a punishment. The offence is a bailable offence. However, a criminal lawyer must be hired who can help get the bail without much difficulty. The police after being reported with such a case will arrest the culprit. But if the person feels he is innocent, he can file for an anticipatory bill. There is no surety that he would not be inside the bars at all. The magistrate can put him under arrest for a day or two until they get a hearing in the court. The police officer has to present the case to the court within 90 days. The court will follow its procedure. First, the plaintiff’s side would be heard followed by the defendant or the accuser.

Yes, IPC Section 325 is bailable, which are the type of offences for which the police can arrest the accused without a warrant because bailable offences are usually of a grave and serious nature.

What is the punishment for IPC 325 Case?

The punishment for IPC Section 325 case is imprisonment for up to 7 years or a fine or both.

IPC Section 325 is a cognizable offence, which means offences that are horrific crimes that affect the whole society. It can be tried by any magistrate.

How to file/defend your case for IPC 325 offence?

Since IPC Section 325 is a bailable and cognizable crime, it is always advised to hire a good lawyer who can fight the case for you. Lawtendo is a law-tech company that has around 15000+ lawyers across India on our platform who can help you file/defend your case for IPC Section 325. Lawtendo aims to facilitate legal services/advice provided to the clients are cost-efficient and quality service. You can contact us at +91 967133666 or [email protected].

Difference between Section 335 and Section 325

Both these sections deal with voluntarily causing grievous hurt but the difference between them is that Section 335 deals with the harm caused after provocation and not with the intention to cause harm but only to protect himself. And Section 325 deals with causing the harm voluntarily and with the intention to cause harm. Basically, all the harms and injuries not included in Section 335, come under S 325.

Conclusion: Everyone tries to be safe in every situation, they protect themselves, but in some situations still end up getting hurt. Instead of sulking about it and thinking of taking revenge by attacking back, it is wiser to take a step back and backfire with legal action. Hope this blog was helpful for you in gaining some insight into the legal remedies available for different types of injuries caused by the accuser, intentionally.