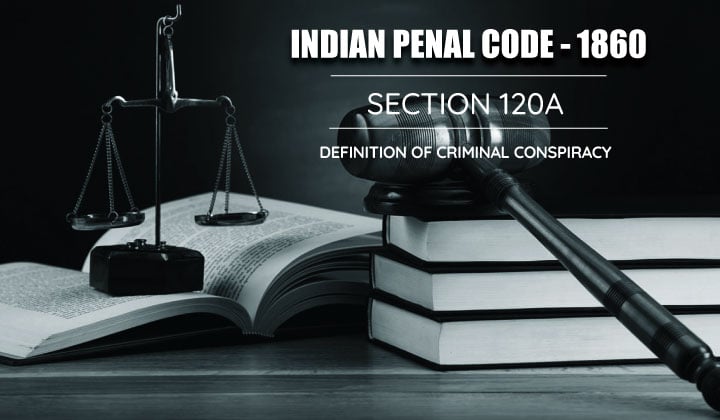 Conspiracy stirs the thoughts, with doubts and confusion of the outcome until executed. The general definition of conspiracy is to plot an illegal act in secret and take the help of more than 2 people to plot the idea of execution of the illicit act. In IPC section 120 A the act of criminal conspiracy is defined as an act done by more than 2 people with a common intention to act or omit to act illegally. Thus, plotting to kill or harm or cause injury with the help of two or more people will attract offense of Criminal conspiracy.

The law aims to punish an offender for thinking to conspire to act illegally with common intention encouraging people to do their part. For the conspiracy to be punished it need not be fulfilled in action, the plotting and agreement of all the conspirators to act with common intention to achieve the goal is enough to convict an accused of IPC 120A.

IPC 120A describes criminal conspiracy as an act of plotting to harm or cause injury through the illegal act, with the help of more than two people with a common intention to achieve a common goal.

In the case of Pratapbhai Hamirbhai Solanki vs. State of Gujarat, the Supreme court held that intention to cause an illegal act is the most important ingredient.

The bail provision in IPC 120B is subject to the type of conspiracy and graveness of the offense which determines the bail application to be accepted or rejected. As the graveness of offense decides if it is bailable or non-bailable.

What is the punishment for IPC 120A Case?

Section 120B (1) states the punishment of death, imprisonment for life, or rigorous imprisonment of 2 years plus for being party to carry out the criminal offense of criminal conspiracy. Whereas punishment of 6 months with a fine for those who are party to the crime of conspiracy which has not being carried out.

Section 120B described that depending on the object of the conspiracy offense it will be treated as cognizable or non-cognizable offense.

How to file/defend your case for the IPC 120A offense?

Connect with experienced criminal lawyers through Lawtendo to file your case. The defense one has in the nature of the offense is that an individual cannot be charged for criminal conspiracy and intention to commit an act with the agreement can only be proved with circumstantial evidence. Like all criminal offenses, the intention is the vital thing to prove for the accused to be convicted of the crime.

Is IPC 120A a bailable or non-bailable offense?

IPC120 A is either bailable or non-bailable depending on the object of the office of criminal conspiracy. Therefore only after determining the object one can apply for bail to the magistrate or to the police.

Firozuddin Basheeruddin & Ors vs State Of Kerala is a case of murder with criminal conspiracy and joint liability. The deceased with his cousin was an agent for a smuggler of gold. Their job was to deliver gold jackets in exchange for Rs 25000 per jacket delivered. However, after the completion of the task, they were not paid the promised amount. The deceased was waiting for the right opportunity to seek revenge, so he informed the detail of the next smuggling consignment to the officials of the Directorate of Revenue Intelligence. As a result, the gold consignment was confiscated and this caused the accused to have enmity for the deceased. The accused with 16 others conspired to kill the deceased as he was creating hurdles in their illegal business. One of the co-conspirators was a retired Junior Commissioned Officer of the Army, hired to shoot the deceased. Although he did not shot the deceased he was charged with IPC 120A. The court evaluated all the circumstances, withness, and evidence to infer the criminal conspiracy to kill the deceased. The court emphasized that the agreement between two or more people with the intention to commit a crime is a criminal conspiracy and the co-conspirator need not know all the details of the plan as long as co-conspirators agreed to act with intention to fulfill the common goal. The agreement itself enough to infer criminal conspiracy. Thus, the supreme court dismissed the appeal and upheld the conviction and punishment sentenced by the High Court.

In Nilesh Sureshbhai vs CBI, the petitioner along with the panel advocate was charged for IPC 120A. The panel advocate was discharged from the charges made against him. Hence in accordance with the definition of section 120A and in the light of the judgment of  Tapovandas Vs State of Bombay where it was held that one person cannot conspire with himself. Also looking into the case where one of the co-conspirators was discharged of the charges, then the charge of criminal conspiracy cannot be on one person alone. Therefore the petitioner’s application to discharge from criminal conspiracy we granted.

Ajay Aggarwal vs Union of India decided the jurisdiction to try the offense of criminal conspiracy which took place in India through a foreign letter of credit from a non-resident Indian in Dubai. The accused conspired to cheat the bank in Chandighar with the help of fabricated foreign letters of credit to avail credit at discount. The charges were framed under IPC 120A for criminal conspiracy, 420 for cheating, 468 for forgery, and 471 using as genuine forged documents. The chief Judicial magistrate discharged all the accused from IPC 120A stating section 188 of the criminal procedure code requires the sanction of the central government to try an offense of criminal conspiracy in India. The apex court held that chain of events was not isolated from one another, though the letters were fabricated in Dubai however it was sent to present to a bank in India where the employee of the bank acted with the further intention to cheat the bank at Chandighar.  Apex court held that section 179 of CrPC empowers the court to try the offense committed either at the place or where the consequence of the offense ensues. The complainant alleged that the act or omission was done in India. Therefore the consequence of a conspiracy, cheating, and forging took place in Chandighar and not abroad. Therefore the charge was maintainable and the appeal was dismissed.

Thus, criminal conspiracy is difficult to prove as it is inferred through circumstantial evidence and it is established in law that a single person cannot be charged and tried for criminal conspiracy. The offense of criminal conspiracy punishes a crime that started in thoughts to conspire to harm or cause injury, and the moment the agreement is reached between persons, it is criminal conspiracy even if the act is done in isolation or in sequence to achieve the object of the criminal intention.