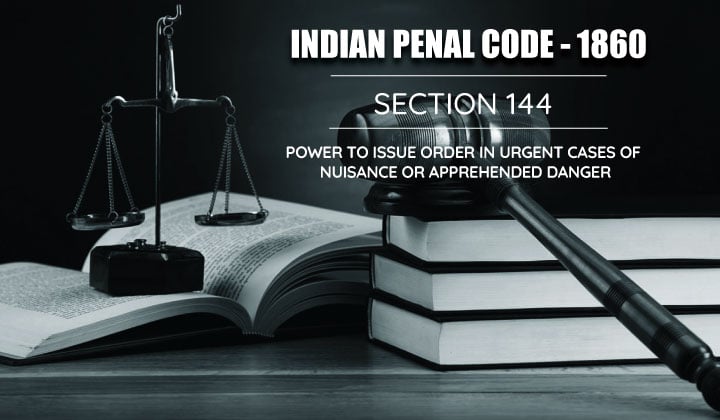 In recent times India has witnessed the imposition of law and order to preserve the life, peace, and health of people and government authorities to fulfill their legal duties without any restrain. This pandemic has introduced many new words and refreshed our memories with some legal sections with its repetition in news channels and newspapers. Such is section 144 of IPC which is sometimes confused to be section 144 of CrPC. Though the meaning of the term may look similar, however, they are different.  Section 144 imposed is CrPC and it is imposition has urgency to curb the unforeseen harm or disruption of peace and tranquility. Whereas Section 144 of IPC is charged against people who join the unlawful assembly with any object capable of being used as a weapon to cause death. Section 144 of CrPC is a procedure of law on how to control the movement of the mass gathering that causing the nuisance to peace and tranquility of the public. Whereas section 144 of IPC is used to describe an offense as whoever armed with any deadly weapon or any object that can be used as a weapon of offense and likely to cause death is a member of an unlawful assembly. The punishment for the offense is an imprisonment term of up to 2 years or a fine or both.  It is a cognizable and bailable offense trial by any magistrate. It is a non-compoundable offense.

Section 144 of IPC is a punishment for an offense of joining an unlawful assembly with a deadly weapon that can cause death.

Section 141 describes the term unlawful assembly as an assembly of 5 or more person at a place with the common intention to do the following act:-

Yes, IPC 144 is a bailable offense and one can obtain bail from the Police officer in the police station if the complaint has not been sent to the magistrate.

What is the punishment for IPC 144 Case?

The punishment prescribed for IPC 144 depending on various circumstances and the evidence in the case can be imprisonment up to 2 years or a fine or it can be both.

How to file/defend your case for IPC 144 offense?

Consult an expert criminal lawyer from Lawtendo to file and defend your case for IPC 144.

Is IPC 144 a bailable or non-bailable offense?

IPC 144 is a bailable offense. A bailable offense is where one can apply for bail at the police station and it is granted to the accused as a matter of right. The accused need to execute the prescribed bail bond.

Nissar Mohamad Vs State was a case of violation of section 3 of the PDPP Act and the total 25 accused were arrest under various sections. Out of 25 accused one was acquitted and two did not face trial. However, the remaining accused were convicted and sentenced to punishment or rigorous imprisonment from one month to six months with a fine of Rs. 2000 under section 143, 144, 147, 148, and 149 and simple imprisonment under section 3 (1) of the PDPP Act.

In this case, the accused were convicted on the basis of arrest from the place of the procession. During the procession, some people petalled stone at the co-operative Bank and district office of Mining and Geology and broke the glass window of both places. There was no concrete evidence of the people arrested are members of the unlawful assembly. No person from the prosecution witness was able to identify any of the accused to be a member of the unlawful assembly. It was a case of spot arrest where the police on patrolling found that a group of people was forcing the shop owners to close the shop in order to comply with the statewide Hardtal. During the course of the trial, the prosecution witnesses turned hostile and some could not remember the number of people gathered on the day of the procession.

Therefore, due to lack of proof, the court gave the benefit of the doubt and set aside the conviction and sentence passed by the Judicial first-class magistrate court.

Chandra Sen Vs State of UP is the case where one person who was a station officer saw 5 people gathered with arms in one of the houses of the local area. They approached to apprehend them 5 but they shot at the policemen, however, the policemen were saved and managed to arrest the 5 accused and charged them with offenses punishable under section 144 and 307 read with 149 and also section 25(1) of the Arms Act. During the trial, the accused were acquitted of section 307 and 149 of IPC and 25(1) of the Arms Act. However, they were still convicted and punished to pay a fine of Rs 400 each or undergo six months of rigorous imprisonment in lieu of the fine. In the appeal, the counsel of the accused contends that the prosecution failed to prove the object of criminal intent under IPC section 307 and Section 25(1) of the Arms Act. Since the prosecution could not prove criminal intent in the assembly of the 5 people therefore it cannot become unlawful, because it is not unlawful assembly the punishment under charges of IPC section 144 was set aside and the appellant-accused was acquitted from charges of IPC section 144.

Likewise in this case the lack of proof of criminal intent and inability to prove that the assembly was unlawful, the court allowed acquittal from the charges of IPC Section 144.

Therefore, unless a criminal intent to commit a crime and assembly is proved to be unlawful it is not possible to convict the accused of the IPC section 144.