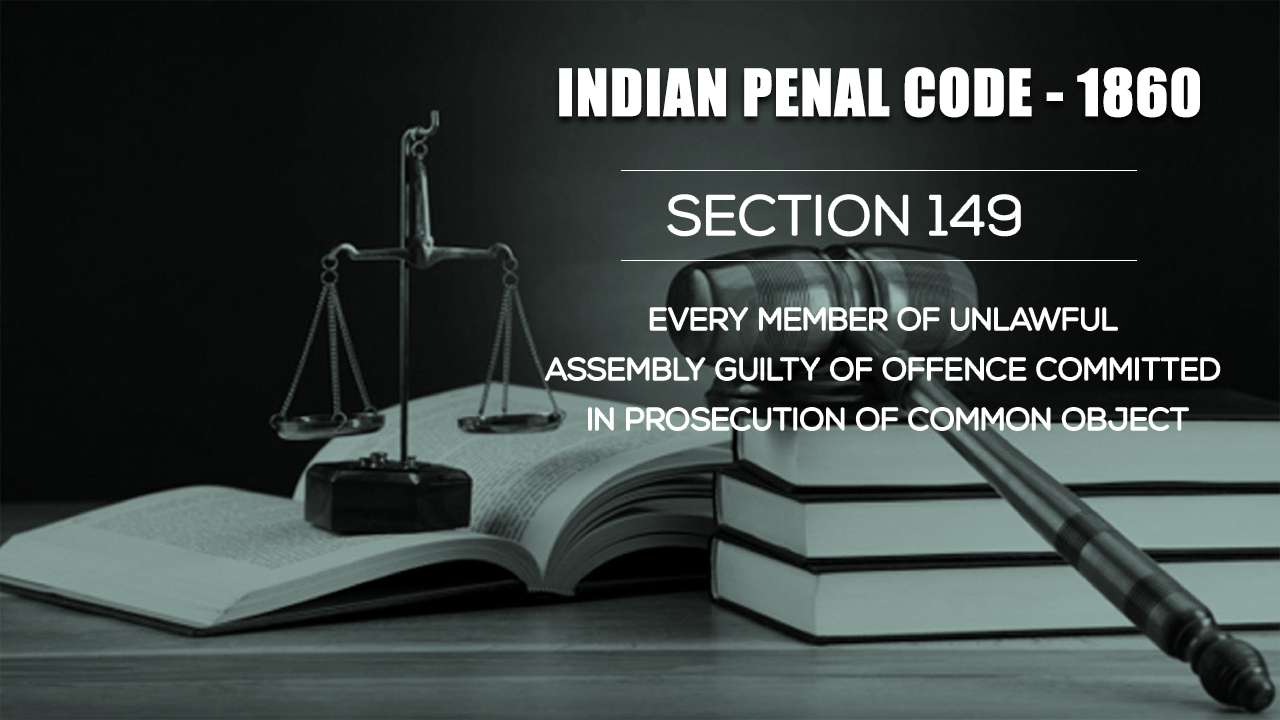 Chapter VIII of Indian Penal Code, 1860 deals with the offences against the public tranquility. Public Tranquility means when a group of people come together with a common object for an activity which may cause disturbance to the public at large. Mostly these activities are criminal in nature and also have more than five members. It not just affects the public at large but also the State. It contains from Section 141 to 160. This blog deals with Section 149 of IPC.

To commit an offence under this Section there should be unlawful assembly (more than 5 members) having one or more common object as per Section 141 of IPC and it could be understood from gathering of the members, their nature of assembly, the arms and weapons carried by them and the behaviour of the members before occurrence of the offence. Under this Section it creates a joint liability on the members of the assembly for criminal acts done by anyone  for common objects as decided.

The punishment of such offence is the same as the offence committed. For eg. if there is murder done then it will be said that section 302 read with section 149 IPC.

IPC 149 can be tried by the court who tries the offence. The Ministry concerned with this offence would be the Ministry of Home Affairs and the department in this offence is the Department of Internal Security.

How you will file/defend your case for Section 149 IPC:

Model Form of charge under Section149:

“ I (name and office of Magistrate, etc.) hereby charge you (name of the accused) as follows:

That, on or about the _______ day of _______ at_________ you were a member of an unlawful assembly, one of the members of which committed the offence of__________ (specify the offence) in prosecution of ( merely specify the common object) of that assembly (or the offence of _________ which the members of that Assembly knew to be likely to be committed in prosecution of that object) and you, being a member of that assembly, at the time of committing of that offence, are, therefore, guilty of that offence punishable under ___________ (specify the section), read with Section 149 of IPC, and within my cognizance (or within the cognizance of the Court of Session).

There was an irrigation dispute between prosecution and appellants. As per the prosecution, appellants wanted to irrigate the land and when they were prevented from doing so, Mainu mandal resisted as a result of which Bhudeo Mandal who is now dead gave a blow to the deceased Mainu Mandal. Other appellants were armed with lathis but they didn't cause any injuries either to witness or the deceased. The sessions judge had convicted the accused Bhudeo Mandal under section 304 IPC and and sentenced him to undergo imprisonment for life and other appellants under section 326 / 149 IPC and sentenced them to 3 years rigorous imprisonment , but there was acquittal of the accused of the individual charges under section 323 and 325 of IPC. Before convicting the accused under Section 149, there must be clear finding regarding the nature of the common object and that such an object is unlawful. The absence of such findings, as also any overt act on the part of the accused, the mere fact that the accused were armed would not be sufficient to prove the common object. Here the other appellants were just having lathis with them but they did not attack anyone. In this case there was no evidence nor any findings that any essential ingredients of Section 149 was established by the prosecution. As a result appellants were discharged from their bail bonds and need not surrender.

In this case the Court held that the facts led to inference that there was a prearranged plan and a common object and therefore they were liable under Section 149 IPC.