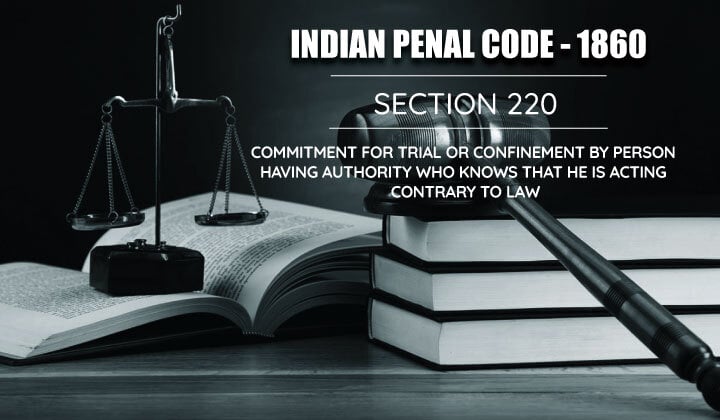 Why do people fear the police? This question has crossed every person’s mind once in their life. An easy answer to the present is that there are numerous incidents where police had to act by their duties but due to unknown reasons, they didn't. Police have the proper to arrest with a warrant and take a private in confinement. This right is given to them by our judiciary and thus the Constitution of India. But illegal confinement could even be a severe offence under section 220 Indian code, 1860. This suggests nobody can keep another person in his/her custody albeit they need the authority except if he/she is given order by the Court.

In simple words, it's mentioned that whosoever has the authority to commit a personal trial or to confinement, keeps the person within the confinement with malicious intent by exercising the authority given to him/her by law. He/she is well informed that such executions are becoming contradictory to law. Such persons are to be punished with imprisonment up to seven years and will be liable for a fine or both. Being a huge offence, it's still a bailable offence in India.

Section 220 could even be a bailable offence. An affected person or his/her relations can file a complaint against the accused. But with no strong evidence the accused often began on bail, If such an order is gone the Court.

The cognizable offence is defined as an offence where a policeman can arrest a private without a warrant. After the arrest has been made, the accused are getting to be presented before the Magistrate within 24 hours. The offence mentioned above could even be a cognizable offence.

Punishment for Section 220: Section 220 deals with wrongful confinement in an area of the accused. He/she shall have the authority to undertake to do so, but having a vengeful intent and action following such intent is contrary to law. Punishment for this crime is imprisonment for seven years or fine or both based on the decree passed by the Court.

How to file/defend your case for Section 220 offence?

Defending one’s case during this matter won’t be easy. The onus lies to the accused as he/she is found guilty during the investigation and possesses to prove his/her innocence in Court. But if the prosecution or defense has strong arguments and vital evidence through which it is often observed that this executor deliberately caused damage and features a malicious intention. The fallacious are often punished because the Court makes it mandatory.

As per F.I.R., the prosecution version is that on 26.2.1994, at about 10:15 pm, informant- Krishnapal Singh was getting to Shastri Nagar on a scooter and when he reached near supply depot at about 10:30 pm where existed a speed breaker he trapped his scooter then all of a sudden two men stopped him showing a country-made pistol and snatched away his scooter and ran towards Commissioner Chauraha, right then police of P.S. Lal Kurti reached there and his informant told them that two miscreants had fled from the place after snatching his scooter which resulted in a vigorous chase to the miscreants. The license number of the informant was DL3SC0326. He had to borrow the said scooter from one of his friends who he recognized the miscreants. The case crime no. 64 of 1994, under Section 392 was registered against two unknown persons.

With a view to proving the false presence of the deceased within District Meerut, accused Pratap Singh got registered crime no. 49 of 1994, under section 504, 506 IPC, P.S. Bhasuna, District Meerut on 25.2.1994 against deceased Gopal Maheshwari and his brother in pursuance to well-planned conspiracy. Furthermore, accused persons managed the surrender application in the name of Gopal Maheshwari in the court of ACJM-4, Meerut on 25.2.1994 in some cases falsely. It was also a motivated attempt to prove the physical presence of deceased Gopal Maheshwari in Meerut on 25.2.1994. During the investigation by C.B.I., the theory of police encounter was found to be absolutely false and concocted by the accused persons and so was the case of surrender application under Section 504 and 506 IPC as mentioned above. The investigation also discloses that on 25.2.1994, Vishnu Kumar sent a telegram to the Hon'ble Chief Justice of India, New Delhi mentioning that Suresh Chandra and Gopal Maheshwari (deceased) had been brought to Meerut, at about 4:00 am on 25.2.1994 from Kasganj for killing them in a fake encounter. Another telegram was also sent to S.S.P., Meerut by Rakesh on 25.2.1994 to the effect that Meerut Police had brought Gopal Maheshwari from Kashganj for the fake encounter. Further investigation revealed that Gopal Maheshwari (deceased) was known from before to the accused-applicant and other co-accused, who got his body cremated as unidentified with an ulterior motive. Further, there was found no speed breaker on Mall Road on 26.2.1994.

Further, it has come in the investigation that accompanying other policemen were not associated with the accused persons at the time of encounter and that the accused-applicant, co-accused Sanjay Sirohi, Mahesh Singh, and Chandra Pal Singh kidnapped the deceased Gopal Maheshwari from Kasganj on 25.2.1994, hence they committed offence under Section 364 IPC and thereafter accused-applicant, Sanjay Sirohi, Mahesh Singh, Chandra Pal Sing, Om Pal Singh, Shyam Lal Kashyap committed his murder on 26.2.1994 and caused the disappearance of evidence and fabricated a false police encounter case in conspiracy with co-accused Krishnapal Singh and thus they committed offence under Section 120-B IPC read with Section 302, 201, 220 IPC and substantive offences thereof. Accused- Pratap Singh lodged false crime no. 49 of 1994, under Section 504 and 506 IPC at P.S. Bahsuma, Meerut on 24.2.1994 against deceased Gopal Maheshwari and his brother, whereas the deceased was in illegal custody of the aforesaid accused and thus he has committed an offence under Section 201 IPC. Further, it is mentioned in the charge sheet that the Government of U.P. was requested on 5.4.2019 for according sanction for prosecution against aforesaid accused persons but the same was still awaited. The officers of the C.B.I. of the level of D.S.P., S.P., and D.I.G. pursued matters at various levels including Chief Secretary and many reminders were also issued to the Government and ultimately the court was pleased to issue direction to the State Government on 12.7.2001 through Chief Secretary to expedite taking the decision to accord sanction for prosecution within 60 days. The government did not respond and then the court issued a reminder on 8.11.2001 to the Chief Secretary of U.P. for compliance with the order dated 12.7.2001 of the court. In spite of directions of the court, sanction had yet not been issued by the State Government, and prayer was made that cognizance of the offences may be taken against accused persons and they are summoned and be put to trial according to law.

From the side of C.B.I., a counter affidavit has been filed in which it is stated that the case was registered on 22.12.1995 at C.B.I./SIC-IV, New Delhi in pursuance of the order of Apex court dated 15.12.1995 in Writ Petition (Crl.) No. 93 of 1994 (Smt. Muni Devi Vs. the State of U.P.) against S.L. Kashyap the then Station Officer, P.S. Nauchandi, Meerut and other co-accused which includes the accused applicant under Section 120-B read with Section 302, 364, 201 and 220 IPC and subsequent investigation was entrusted to C.B.I/S.I.C.-IV, Lucknow on 27.12.1995. The petitioner Munni Devi was the mother of the deceased Gopal Maheshwari, who stated that her brother Suresh Chandra and her son Gopal Maheshwari (deceased) were illegally taken away on the morning of 24.2.1994 by police personnel subsequently in the night of 26/27.2.1994 deceased Gopal Maheshwari was killed in a fake encounter.

Conclusion: Nation’s security is in the hands of our Judiciary and police personnel. Any such behavior cannot be tolerated. Fake encounter cases reveal how easy it is to hide the truth and people who have authority, power, money always have an upper hand as compared to a common man.