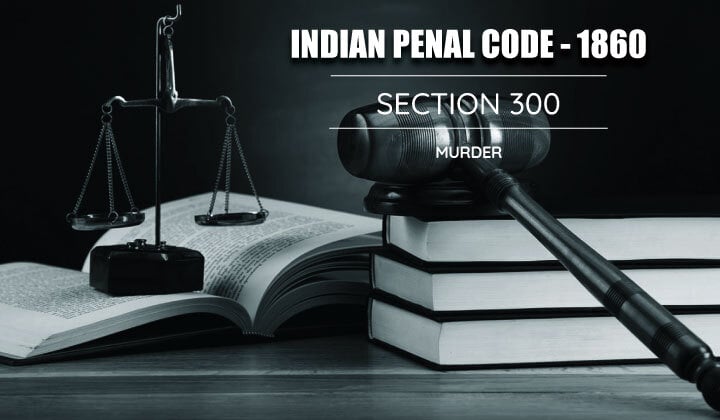 The word "murder" derived from the Germanic term "morth," which means "Secret Killing." Murder means when one person is killed by another person or a group of people having a pre-determined intention to end the former's life. An offence will not amount to “murder” unless it contains an act that falls under the definition of culpable homicide as per the definition of Murder under IPC. All culpable homicides are not murders but all murders are homicides. The offence of “Murder” comes under section 300 of the Indian Penal Code and it also states five exceptions when culpable homicide is not considered as murder.

Section 300 IPC is one of the provisions relating to the offence of “Murder. According to this section, culpable homicide is considered as murder if:

The ingredients of section 300 are as follows–

Causing Death – There must be an intention of causing death.

Doing an act – There should be an intention to cause such bodily injury that is likely to cause death.

Is IPC 300 bailable or non-Bailable?

What is the punishment for an offence under IPC 300?

How to file/defend your case for IPC 300 offence?

The case under Section 300 will simply be whistled by registering a First Information Report at the nearest police station to the place of occurrence.

When someone is charged with offences u/s 300 IPC or is accused of the provisions u/s 300 IPC, then it is advised that he/she shall hire an expert lawyer who has experience in dealing with criminal cases. Because the offences u/s 300 are cognizable, non-bailable, and also, the punishment u/s 302 extends up to death or imprisonment for a lifetime, accompanied by a fine of a convict.

Charged with a crime is a serious matter, whether major or minor. A person who is facing criminal charges risks serious penalties and consequences. That is why it is important to hire an expert criminal lawyer. A criminal lawyer can help you to understand-

Also, during the trial, an experienced lawyer would strive to defend your case and would for sure benefit you, either by obtaining an acquittal in your favor or by reducing the punishment.

State of Karnataka v. Shariff, AIR 2003 SC1074: According to the Statement of a child witness who was deceased’s son, that his father tied hands and legs of his mother and burnt her cannot be rejected on the basis of the stray statement in cross-examination where he has stated that he was in his grandmother’s house when his mother caught fire, is fairly reliable on the factum of the incident and the same cannot be rejected, held accused was liable.

K.M. Nanavati vs. the State of Maharashtra, 1961 (AIR 1962 SC 605): In this case, the Supreme court had explained the law relating to provocation in India. The court observed that: -

Rawalpenta Venkalu vs State of Hyderabad AIR 1956 SC 171: Where the accused set fire to the single room hut, in which the deceased was sleeping with the intention of causing the death of the deceased. They also locked the door of the room from outside and also prevented the villagers from going to the rescue of the helpless inmate of the room.

The Supreme Court upheld the decision of the sessions court and held that the intention of the accused to kill the deceased was a clear case of Murder under section 300 and granted the death penalty under section 302.

Selvaraj vs State of Tamil Nadu (1998) 9 SCC 308: In this case, the accused because of some dispute stabbed the victim on his left chest with a knife and brought it downwards. The victim’s intestine came out of the abdomen with bleeding. The supreme court in this case held that the intention to kill the deceased was very clear from the act of the accused and was liable for the offence of murder.

Conclusion – In this blog, we discussed section 300 of the Indian Penal Code, 1860 which deals with “Murder”. It is considered one of the heinous crimes. The act of taking away someone’s life with proper knowledge and intention is punishable with either death or life imprisonment and fine. The Court grants the death penalty only in the rarest situations, where the accused is a threat to society as the Court recognizes the value of life. The Court has the right and power to lower the punishment. killing another person is considered one of the gravest crimes known, with the exception of sedition and treason.

This article on section 300 of IPC was drafted by Ms. Puja, BBA LL.B, 4th-year student, school of Law, UPES Dehradun
TALK TO AN EXPERT LAWYER