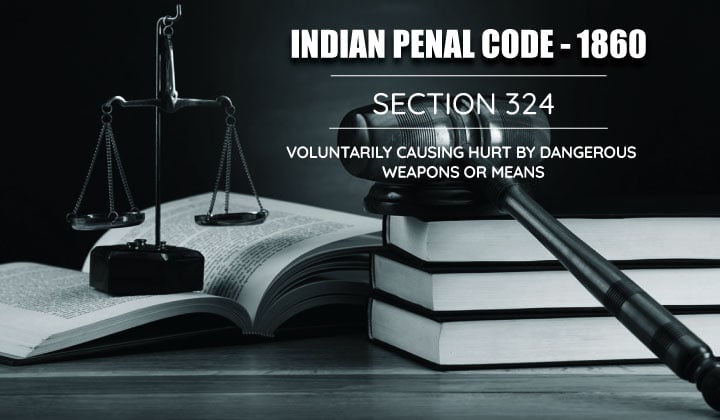 Section 324 of the IPC sections anyone except in the cases provided in 334, intentionally and voluntarily initiates hurt using any dangerous instrument . or weapons firmly used for shooting, cutting, or stabbing anything instrument that causes death this might include any heated, acidic, poisonous, corrosive or explosive substance highly injurious to health thus making it impossible to inhale, swallow or contaminating blood or deteriorating human health even by using any animal, shall be punished with the imprisonment of a term not less than 3 years along with fine or both.

What constitutes hurt by dangerous weapons or means?

It is often said that certain things can’t be changed similarly when the hurt is successfully caused to a person with voluntary actions then the suffering of the victim is very heavy and devastating, the result may end with any kind of injuries, diseases or even fatal thus causing the death of the victim. Though many diseases are curable, the loss suffered cannot be restored.

This section punishes causing hurt using any instrument which, when used as a weapon of offense, may cause death. For instance, a stick becomes a dangerous weapon because of an iron knob at its top, and when that part of a stick is used as a weapon of offense it is likely to cause death, and thus, the offense committed with such an instrument would fall under section 324 IPC

Where the accused assaulted the injury with a wooden club and the rapier(an instrument for cutting grains) and the injured sustained bleeding injuries on his head, the accused was convicted under this section. A wooden weapon can be said to be a deadly weapon and may cause death, id used as a weapon in a particular situation.

X stabbed B in the stomach with a knife having the intention to kill B. B did not die but got hurt grievously. The intention of A shows that he had complete knowledge of the consequences of his actions and he acted willfully. Thus, A will be held guilty of voluntarily causing hurt by a dangerous weapon under section 324 of the Indian Penal Code.

The exception to section 324 of IPC

As clearly mentioned in the definition of 324 that anyone causing voluntarily hurt is punishable except in cases of section 334 which includes hurt due to grave or sudden provocation and shall not be punished like the offense in 324 instead the person shall be given a punishment of one month jail and a fine of 500 rupees.

What offense is defined under IPC 324?

IPC 324 Offence is the Voluntarily causing hurt by dangerous weapons or means.

What is the punishment for IPC 324 Case?

The punishment is 3 Years or Fine or Both.

Some offense in which the police officer has no right or authority to arrest without a warrant falls under Non –cognizable offense. The examples of cognizable offenses: Kidnapping, Dowry Theft, Culpable Homicide, Waging War, Murder, Rape, Death,   Unnatural Offences.

The non-cognizable offenses are minor assault or causing simple hurt

How to file/defend your case for IPC 324 offense?

The first and the foremost thing after a particular crime takes place is to go to the local police station either the victim or the relative, friends or family of the victim must file a case, then the next step is to hire a legal practitioner who has a grip on criminal law or have a long term experience on how to move forward with the case. Then with the help of proper evidence the case can be proved, even the bail can also be pleaded depending upon the type f cases, it is upon the discretion of the court whether to grant the bail or not.

Is IPC 324 a bailable or non-bailable offense?

IPC 324 is a Non-Bailable offense.

In a bailable offense, the grant of bail is a matter of right. The right may be either given by a police officer who is in the custody of Accused or by the court holding discretion. The accused may be released on the execution of a “bail bond”, with or without sureties.

In a non-bailable offense, there is no matter of right in the grant of bail but still, the accused can apply for bail with suitable causes it is upon the court to grant it or not.

IPC 324 is tried in the court of Any Magistrate.