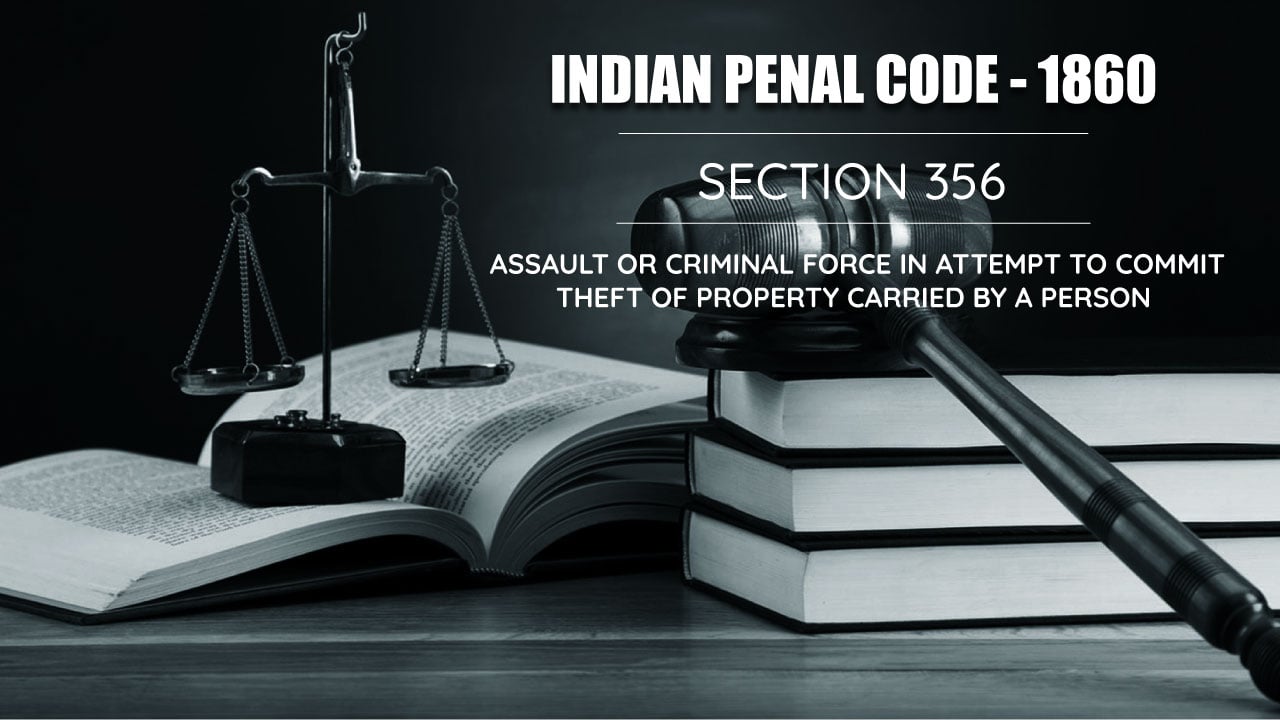 Theft is unfortunately one of the common crimes that happen in almost every single place. Even though people are physically fit but still prefer to earn money from the easy path or maybe through the wrong path. When someone becomes a criminal there is no coming back, it stays with you forever even a person wants to stop doing it but the easy way to get money makes him/her do it again. Theft is a crime which lets the person get money or food, once a person starts getting necessary things by easy way that person won’t be able to do hard work again. In this blog, we will discuss what is IPC 356? What is the punishment for IPC 356 case? Is IPC 356 a bailable offence? How to file/defend your case for IPC 356 offence? Any famous judgment w.r.t. IPC 356 if any?

Section 356 Indian Penal Code: Section 356 talks about that if a person uses criminal force or assault on another person to commit theft of the property that person is having or carrying in that case the person or accused committing assault or criminal force liable to be punished.

Criminal force: Criminal Force is defined as when a person uses force on another knowing that the force might injure the person or hurt him/her still do it to commit any crime or offence is called criminal force.

Assault: Assault is defined as the act where a person causes physical harm or injury to another person or makes unwanted physical contact with a person.

Criminal force or assault on a person to commit theft of the property the person or victim is carrying with herself/himself is a cognizable offence.

Is IPC 356 a bailable or non-bailable offence?

Section 356 of the Indian Penal Code is a bailable offence.

What is the punishment for the offence under section 356 of the Indian Penal Code?

If a person is charged under section 356 of the Indian Penal Code and is found guilty that person should be punished with imprisonment for up to two years or liable to be fined or both.

Where is the trial?

It can be trial in front of any magistrate who is having the jurisdiction to trial the case.

Procedure: If a person charged under section 356 of the Indian Penal Code, then the procedure for the case should be like this:

If a person wants to file a case against someone under section 356 of the Indian Penal Code, then the person should follow these steps:

Conclusion: Hence it is concluded that if a person is charged under section 356 of the Indian Penal Code or commits assault or criminal force on another person in order to commit theft of the property the person is having or carrying with himself/herself or wearing, then that person is liable to punished with imprisonment for up to two years or shall be liable to fine or both.