Kidnapping and its Consequences - Section 363 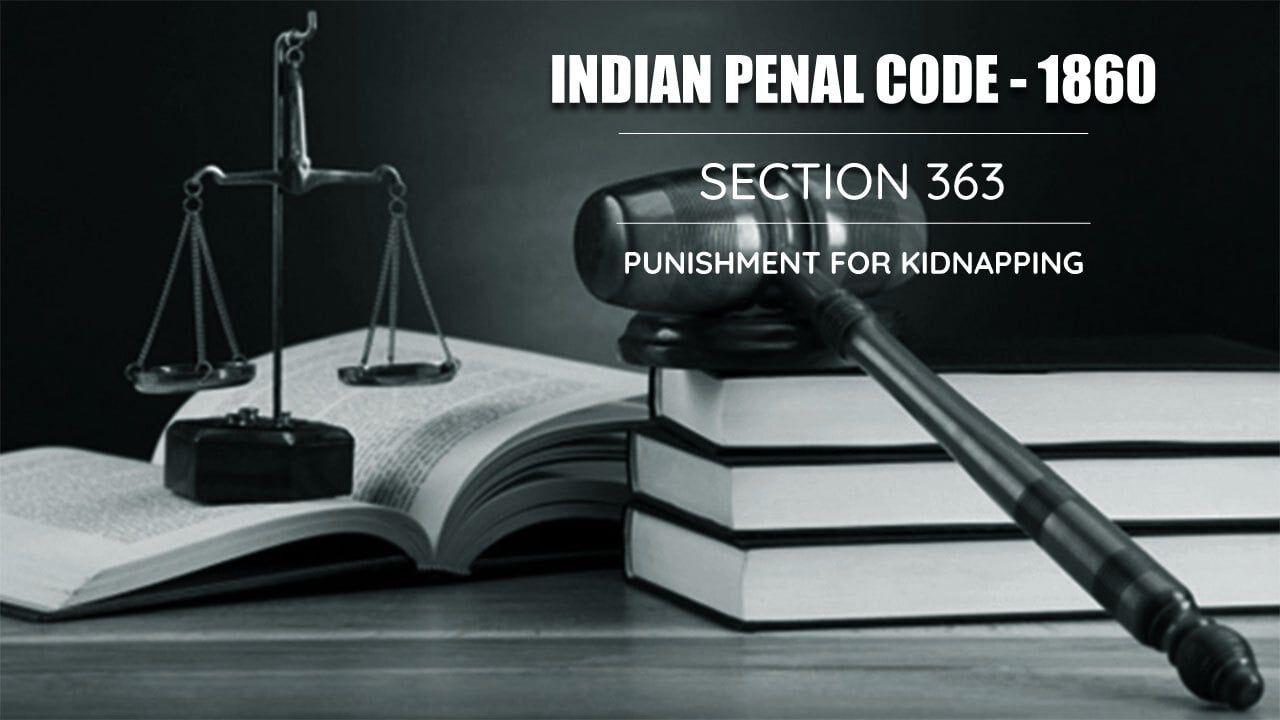 Crime rates are increasing day by day. Offenders are using new tricks and technologies to commit crime. Our judiciary is functioning on this problem day and night. Kidnapping, extortion, cyber crimes are a couple of to say . Kidnapping of senior citizens, minors and extracting money from their family has become a standard method for criminals. Indian legal code , 1860 Section 363 deals with kidnapping and its punishment. India has very severe laws for this offence because it can possibly cause harm to the life and liberty of the victim.

Whoever kidnaps a person from India or from his/her lawful guardian, shall be punished with imprisonment of either description for a term which can reach seven years, and shall even be susceptible to fine.

In Uttar Pradesh the offence mentioned under section 363, the Indian legal code is non-bailable.

In simple words, it's mentioned that whosoever kidnaps a person from India or from his/her guardians, are going to be punished with either imprisonment which can reach seven years and can be responsible for fine. Being a significant offence, it's a non - bailable offence in India.

What's the punishment for the Section 363 Case?

Section 363 deals with kidnapping. Kidnapping means capturing someone and holding them detained, typically to get a ransom or money. Kidnapping of minors may be a non - bailable offence, whereas kidnapping an adult may be a bailable offence. Punishment of this offence is 7 years of imprisonment. The accused if proved guilty will also be responsible for fine.

Cognizable offence is defined as an offence where a policeman can arrest an individual without a warrant. After the arrest has been made, the accused are going to be presented before the Magistrate within 24 hours. This may be a cognizable offence, the victim’s parents or close relatives can file a FIR in their local police headquarters . If things go out of hand, then, policemen have the authority to arrest without warrant.

The way to file/defend your case for Section 363 offence ?

Defending one’s case during this matter won’t be easy. Onus lies to the accused as he/she is found guilty during the investigation and has got to prove his/her innocence in Court. But if the prosecution or defence has strong arguments and vital evidence through which it is often observed that this executer deliberately caused damage and features a malice intention . The fallacious are often punished because the Court fits it mandatory.

Suramani vs State By Inspector Of Police, 10 March, 2011: Based on the above materials, the court caused charges under Sections 366, 363 and 376 (1) IPC against first accused and Sections 363 and 366 against accused 2 to 4. All the accused denied the fees . Therefore, they were placed on trial. During the trial, on the side of prosecution as many as 18 witnesses were examined and 13 documents were exhibited and 9 material objects were exhibited. When the accused 1 to 4 were questioned under Section 313 Cr.P.C. on the incriminating circumstances found within the evidence of prosecution witnesses, they flatly denied as false. However, they didn't prefer to examine any witness on their side nor did they mark any defence document. Having considered all the above materials, the court found the accused 1 to 4 guilty and convicted them and sentenced them to undergo imprisonment as narrated in paragraph No. 1 of this judgment. That's how, the appellants 1 to 4/accused 1 to 4 are now before this Court with this appeal. Now coming to the charge under Section 363 IPC, the Court is unable to know on how we will simultaneously frame two charges under Sections 366 and 363 IPC, concerning one and therefore the same occurrence. it's noticeable that these two charges haven't been framed as alternative charges. Anyhow, since we are holding that the conviction under Section 366A is against the law , may now proceed to analyse whether the charge under Section 363 IPC has been proved by the prosecution beyond reasonable doubt. Now, the subsequent question is, whether the said act of the primary accused in taking her, even with consent, to varied places amounts to an offence under Section 363 IPC. During this regard, the age of the victim girl plays an important role. it's the burden of the prosecution to prove that P.W.2 was a minor at the time of occurrence. The learned counsel for the appellants would straightaway believe the evidence of P.W.10- Dr. Mangayarkarasi and Ex.P.9 point out that at the time of occurrence, she was aged 19 years. But, as the Court considered the opinion, no weightage might be given to the evidence of P.W.10 during this regard. P.W.10 has given the opinion that P.W.2 was aged about 19 years from out of the physical appearance of P.W.2 and it's not support any checkup . Such opinion supported mere physical appearance cannot either attend conclusively prove the age of the victim or a minimum of to guide the Court to reach the right age of the victim girl. Therefore, we have no hesitation to reject the evidence of P.W.10 and Ex.P.9. When, we were holding that P.W.2 was still a minor at the time of occurrence, the next question would be as to, whether the offence under Section 363 IPC would be made out. For this, the learned counsel appearing for the appellants would rely on the judgment of the Hon'ble Supreme Court rendered in S.Varadarajan vs. State of Madras, reported in AIR 1965 Supreme Court 942, wherein, the Hon'ble Supreme Court has held that if a girl, who is in the border of attaining majority and capable of knowing the full import of what she is doing and went on her own accord, the same cannot make out any offence under Section 363 IPC. Applying the said principles to the facts of the present case, if we analyse the evidence of P.W.2, it goes without saying, as I have already concluded, that P.W.2 willingly went along with the first accused to various places and therefore, no offence under Section 363 IPC would be attracted against the first accused . As a corollary, appellants 2 to 4 are also entitled for acquittal. Thus, I hold that the appellants 1 to 4 are entitled for acquittal from the conviction and sentence imposed against them under Section 363 IPC.

Section 366A IPC is a major offence whereas Section 363 IPC is a minor offence compared to that of Section 366A IPC. There is therefore a difference in respect of the said two offences in respect of the punishment also. Section 366A IPC envisages a maximum punishment of ten years whereas Section 363 IPC envisages a punishment of seven years. Therefore, while acquitting all the accused persons from the charge of offence under Section 366A and 372 read with Section 511 IPC, we acquit the appellant Nos. 1 and 2 from all charges. Whereas, we hold that the appellant No. 3 is guilty of the offence under Section 363 IPC and accordingly we proceed to convict him accordingly. Having held thus, we have to pass an order of sentence against the said accused-appellant No. 3. The incident is that of the year 1992 and 15 years have gone by, therefore, interest of justice would be sub-served if appellant No. 3 is sentenced to undergo rigorous imprisonment for a period of three years

Conclusion: Kidnapping and abduction infringe the essential right to life and liberty of an individual , as embodied by Article 14 of the Indian Constitution. With the steady increase within the number of victims of those heinous crimes, the necessity to stop the cases of kidnapping and abducting has become particularly important, especially when it's finished forced beggar, maiming, and sexual activity .