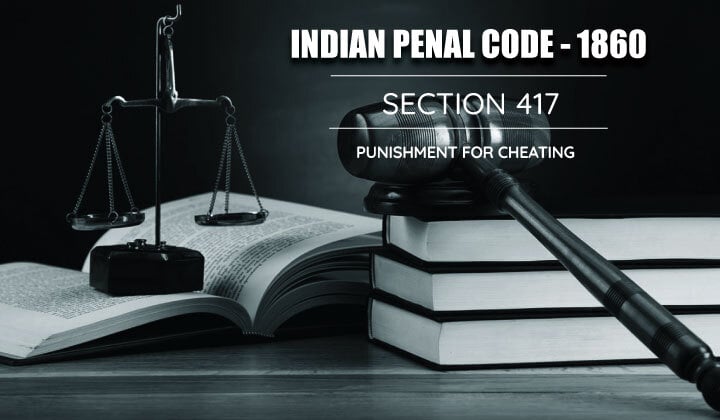 According to Section 415 of the Indian Penal Code, cheating is defined as deceiving an individual fraudulently or dishonestly in order to persuade that person to deliver or consent to keep the property. That when a person fraudulently, dishonestly, or knowingly encourages another person to do or omit something that he would not have done if he hadn't been misled, and the act causes damage to that person's body, mind, reputation, or property, that individual is said to cheat.

This offence is penalized under Section 420 of the IPC if the act of the deceiver results in the transfer or damage of any property or the unauthorized modification of any valuable security.

It's indeed important to confirm, under Section 420 of the IPC, that the plaintiff relied on a fraudulent misrepresentation made by the defendant, and also that the accused intended to defraud the complainant.

Section 417 of the Indian penal code is a bailable offence and offenses or crimes that are bailable are ones that are not particularly serious in nature. Bail is a legal right in certain situations, and the arrested person must be released after posting bail with the police. In such cases, the police have the authority to give bail.

Is IPC 417 cognizable or Non-cognizable?

It is non cognizable offence and a non-cognizable offence is one that is classified there in Indian Penal Code's first schedule and is bailable. In the cases of non offence, the police can't arrest the suspect without a warrant, and they can't begin an investigation without the court's approval.

Any individual can be deceived.

How to file or defend your case for IPC 417 offence?

If the individual is defending his case under section 417 of the IPC, he should hire a lawyer and work as per the case's facts and circumstances. Get your complaint written by an excellent criminal lawyer so that the police cannot reject it on any grounds. If indeed the police refuse to record your FIR, you have the option of filing a written complaint with the police station's Superintendent. A competent lawyer will strive hard to defend your case in court and will almost surely assist you, either by getting you out of the case or by lessening your sentence.

The Calcutta High Court, in R. v. Dabee Sing 1867, found a person guilty of violating Section 417 by bringing two girls and passing them off as ladies of much different status than what they were and marrying them to two Rajput’s upon receiving the standard bonus. These same two Rajput’s who allowed to marry the two girls in the belief that they will be marrying females of their very own caste, as well as social standing, had been fraudulently and dishonestly influenced to do something (i.e., to marry women of a caste completely prohibited to them) that they'd have omitted if not for the suspect's deception.

In R. v. Puddomonie Boistobee 1866,  a man was duped into parting with his money and entering into a contract of marriage under the false impression that the woman he was going to marry was indeed a Brahminee. Section 417 of the Indian Penal Code was used to prosecute the person who influenced the plaintiff to marry that girl.

Conclusion: Cheating is described as a crime under the Indian Penal Code 1860 where a person deceives another into doing or not doing something. The most crucial factor to evaluate is the accused's purpose, which plays a significant role in determining his liability. Deception and inducement are the two primary components that must be addressed in order to establish the offence. It is necessary to establish the accused's intent to defraud at the time of making false statements. This must be demonstrated that the accused made the promise, failed to maintain it, and took no effort to keep it. These are the considerations to make while deciding whether to penalize the accused under section 417 or 420, as both of these sections deal with punishment for cheating.

This article on IPC Section 417 is written by Mr. Abhinav Kumar, a Final year student at the University of Petroleum and Energy Studies, Dehradun.
TALK TO AN EXPERT LAWYER