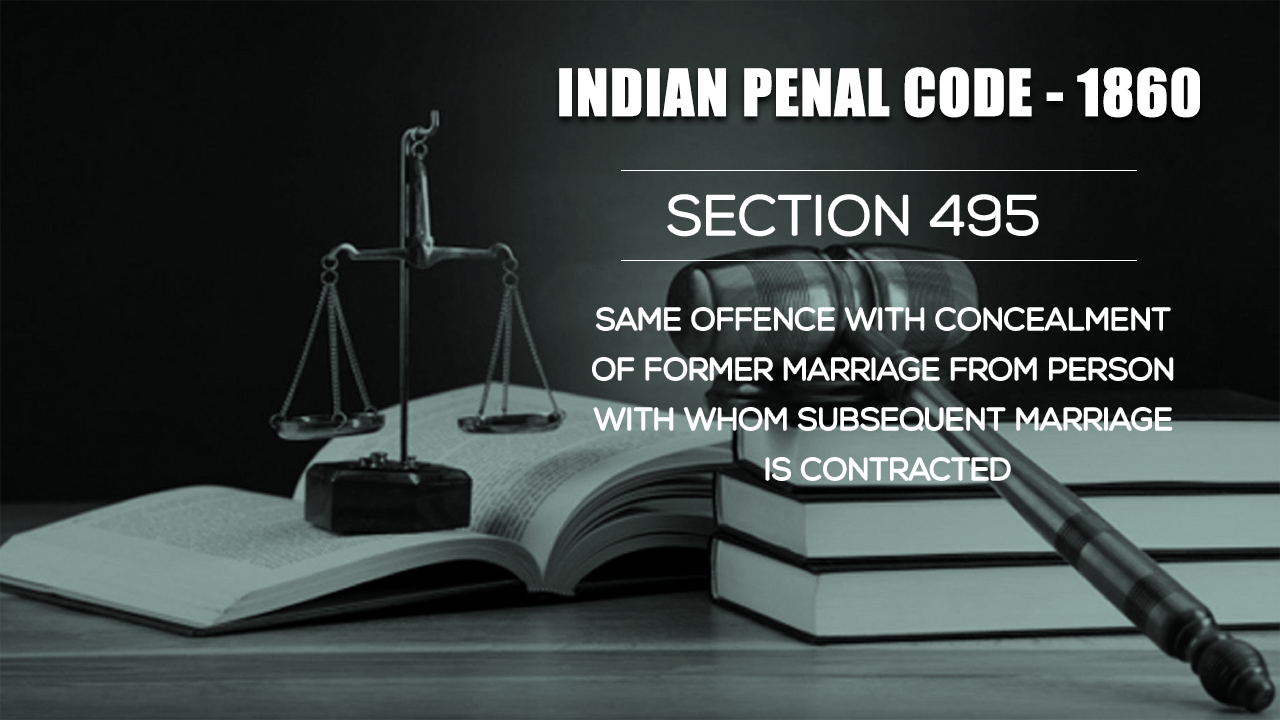 Chapter XX of the Indian Penal code looks into the offense arising out of matrimonial conflicts. A civil union that is to be upheld and cherished turns into an offense the moment the venom of lies starts to poison the nuptial bliss. Therefore, the law has been created as an antidote to give relief to the victim of lies.

Thus, concealing the fact of the first marriage from the person to whom the second marriage is contracted has been made punishable under this section. The section states that whoever commits the offense defined in the last preceding section which is section 494 of IPC, having concealed from the person with whom the subsequent marriage is contracted, the fact of the first marriage shall be punished with imprisonment of either description for a term which may extend to ten years, and shall also be liable to fine. This section is an extension of IPC section 494 where a man or a woman is punished for bigamy. However, this section gives the right to the aggrieved spouse from the second marriage to make a complaint on account of non-disclosure of the first subsistence marriage.

IPC 495 is charged to a person whether man or woman in the case for concealing the truth of their first marriage, which is in force at the time of contracting the second marriage with another man or woman. It is a gender-neutral section and only husband and wife can be a party to the case. Therefore, the ingredients of the offense are as follows:-

Except for the above exception if other ingredients are found in a complaint the accused is subject to punishment under section 495 of IPC.

Yes, It is a bailable offense. In a bailable offense, bail is a matter of right, one can apply for bail under section 437 of CrPC to the police station if the complaint has not been forwarded to the magistrate. The accused has to execute a bail bond and agree to the terms and conditions of the bail.

What is the punishment for IPC 495 Case?

The punishment is for a term extendable to 10 years with a fine.

How to file/defend your case for IPC 495 offense?

The case of Subhash babu Vs State of Andhra Pradesh enlarged the scope of the term wife and aggrieved person under section 495. It tried to look into the object of the section rather than the explanation of the section for the purpose of the application of the law. It considered that the second wife is considered as a lawful wife for the fact that the fraud was committed on her by concealing the fact of the first living spouse of her husband. The court called it to be the grossest form of fraud known to law and must be punished harshly. The Court held that a second wife can make a complaint against her husband under section 495 and it is maintainable.

In the case of Gopal Lal Vs State of Rajasthan, the court decided that to apply section 494 of IPC, the accused have contracted both the marriages in accordance to the costumes and ceremonies of their respective personal law.  In India, personal law governs marriage therefore section 11 of the Hindu Marriage Act has a provision to if a marriage is not performed as per the conditions laid in section 5(i)  the marriage is voidable at the option of the other party. Therefore until a competent court declares the marriage null and void the woman from the second marriage holds the title of wife and can maintain the complaint against her husband.

Mere registration of first marriage without the solemnization of it in accordance with the Hindu Marriage act is not a valid marriage. In  Shaji V Gopinath, the court said that both the traditional ceremonial marriage and registration of the said marriage has to be separate and independent, and registering a marriage and not marrying in accordance with the legal provision will not make it a valid marriage.

Whereas in Neetu Singh Petitioner vs State (NCT of Delhi) the court reiterates the fact with the case reference of Suresh Babu Vs State of AP that the complaint of the second spouse is maintainable.

Therefore, from the summary of all the cases, when the accused hides the fact of the first marriage to the spouse of the second marriage then he is liable for punishment in accordance with section 495 of IPC. From the judgment, we see the essence of validity under Hindu law lies in the solemnization of the marriage in accordance with the personal law of either party and in the absence of it, the marriage is void. However, the spouse from the second marriage can maintain complaint until she obtains the decree to nullify her marriage with the accused. Also, the validity of a marriage under Hindu Law was construed harmoniously with the section 494 and 495 of IPC.

A marries C while being married to B and hides the fact of the first marriage with B to C, B’s complaint against the spouse is maintainable in the court under section 495 of IPC.

A marries C being married to B and hides the fact of the first marriage, however, there was no celebration of the ceremony of marriage with C and neither party followed the costumes of either side required for marriage. In this case, the validity of a marriage is ascertained on the basis of circumstantial evidence and social circumstance around the said marriage and parties. As without a valid marriage, the complainant is not an aggrieved party to the case. Hence, the accused is not charged with section 495 of IPC.