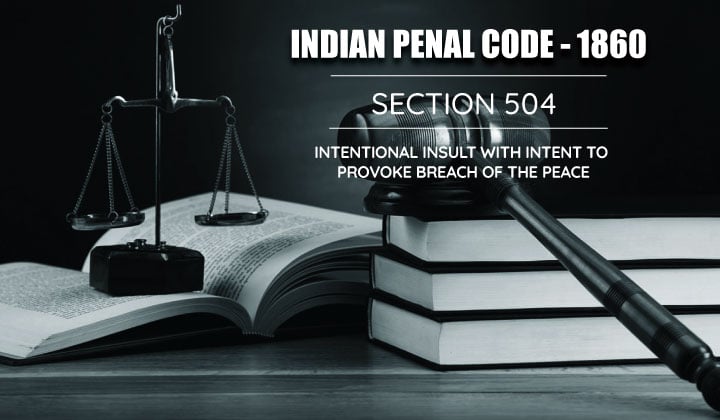 Chapter XXII of the Indian Penal Code deals with Offences related to Criminal Intimidation, Insult, and Annoyance. It includes Criminal Intimidation, Intentional insult with intent to provoke breach of the peace, Statements conducting public mischief, Punishment for criminal intimidation, Criminal intimidation by an anonymous communication, Act caused by inducing person to believe that he will be rendered an object of the Divine displeasure, Word, gesture or act intended to insult the modesty of the woman and Misconduct in public by a drunken person. This Chapter contains Section 504 to 510 of the IPC. This blog deals with Section 504 of IPC.

This section deals with the provisions and punishments of an offense relating to Criminal Intimidation, Insult, and Annoyance. The explanation of this section is Whoever intentionally insults and thereby gives provocation to any person, intending or knowing it to be likely that such provocation will cause him to hinder public peace. Such a person will be liable under Section 504 of IPC.

For understanding this Section we have to first understand the word “ Insult” properly. It does not include the words which we use in daily life. The object of this Section is to prevent a person from using such offensive language or provoking someone to say such words which can cause a breach of peace. In this section, it is shown how a person can be intentionally provoked to commit an offence that is criminal in nature that can harm public peace at large.

It is essential that an insult is involved to commit an offence under this section. The term insult means the words used must be of such nature that hurts the dignity of a person or causes humiliation to the person. It can also include daily songs such as bastard, bitch, rascal, or foolish, etc. to bring offence under this Section it is important that insult should be intentional.

An intention of insult is a matter of fact and not law. It depends on case to case or situation to situation. such insult caused should give provocation of breach of public peace. For example: when there is an insult that involves chastity of mother or sister (i.e a woman) this comes under Section 504 of IPC.

Every insult cannot be classified as an intentional insult. For example mere lack of good manners and casual talks between friends.

Hence, the abuse that comes under Section 504 of IPC should be accompanied with the intention to provoke a person intending or knowing that such provocation will cause the person to break the public peace or commit an offence.

The commitment of an offence under this Section leads to Imprisonment of either description for a term which may extend to two years or with fine or both.

IPC 504 can be tried in the Court of any Magistrate. The Ministry concerned with this offence would be the Ministry of Home Affairs and the department in this offence is the Department of Internal Security.

In this case, the appellant was the Divisional Commercial Superintendent of the Western Railway during an investigation at Kandala Railway Station lost his temper and uttered some abusive words against Mangal Das Chiman Lal Barot (the Assistant Station Master). He has filed this complaint under Section 504 of the Indian Penal Code, 1860. The prosecution was not able to prove the ingredients of offence under Section 504 of IPC. The mere utterance of any words under this Section does not constitute offence. The ingredients of this Section are that there should be an intentional insult and such insult must give provocation to any person and he should have knowledge that such provocation will result in the breach of public peace or any offence.

The court held that since there was a lack of essential ingredients of this Section the judgment was set aside and the appellant was acquitted of the offence for which he was charged.

The accused (applicant) along with his companions ran cows into the field on the night of 18.6.2019 at around 8 pm. The cattle were pushed in such a manner that they started grazing the crops grown in the field. When an informant saw this he tried to stop the accused but instead of stopping he started abusing that person and started threatening to kill him and attacked him with lathi and danda. When the informant cried for help his wife came to save him but they also assaulted her. There was FIR filed against the accused under Section 323, 504, 506 of IPC read with section 3(1)(D) SC/ST Act.

According to the facts of the case, it is clear that it comes under Section 504 of IPC as this offence of insult was intentionally done with the intent to provoke breach of peace. The accused did insult the informant with the intention to destroy the grown crops and when the informant forbade him to do so the accused started using abusive language and beat him. FIR also fulfills the allegations of intentional insult with intent to provoke breach of peace. The court held that the accused was liable for offence under Section 504 of IPC.

How can you file/defend your case for Section 504 of IPC?

Through Lawtendo you can connect to an appropriate lawyer who will help in filing or defending your case for the offence under Section 504 of IPC. We, at Lawtendo, provide around 15000+ Lawyers all over the Country on our Online Platform. We provide Cost Effective and Quality Legal Services.
TALK TO AN EXPERT LAWYER