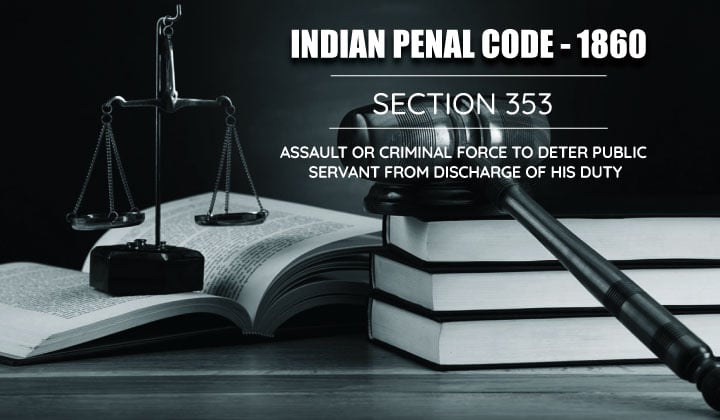 Public servants are here to help, protect and guide the public on various queries, requests, and complaints. They are duty-bound to serve the public. A public officer risks their lives during their duty. Their actions are for the greater good of the large public, therefore whoever tries to stop them from executing the lawful duty is bound to face punitive action against them.

The 16th Chapter in the Indian Penal Code lists various acts of criminal force and assault. Section 353 deals with the use of assault or criminal force to deter public servants from the discharge of their duty. The section describes the offense that any person who assaults or uses criminal force to any person who is a public servant in the execution of his duty, or with intent to prevent or deter that public servant from discharging his duty, or in consequence of anything done or attempted to be done in the lawful discharge of his duty as a public serv­ant. For such an offense, the punishment is 2 years or more of imprisonment or a fine, or with both.

IPC Section 353 describes that causing an obstruction in the duty of a public servant with the use of assault and criminal force with the intention to stop the public servant from performing his duty will be charged with section 353.

Following are the essence of the offense:

(a) executing his official duties

(b) the intention of assault or use of criminal force is to deter him from discharging his duty or,

(c) it was in consequence of anything done or an attempt to do the lawful discharge of his duty.

What is the punishment for IPC 353 Case?

The punishment for IPC 353 is imprisonment up to two years or a fine or both imprisonment and fine. In Maharashtra, imprisonment is up to 5 years if convicted for IPC section 353.

How to file/defend your case for IPC 353 offense?

An experienced criminal lawyer can help to draft applications for bail and defend the accused. Contact Lawtendo to get in touch with the criminal lawyer with expertise in cases related to IPC 353.

Is IPC 353 a bailable or non-bailable offense?

IPC 353 is a non-bailable offense and as it is a serious crime to obstruct any public officer from performing their duty.

Judicial precedents with regard to IPC 353

In the case of Walmik Vs State of Maharashtra, the accused was arrested for putting the gun on the head of the police officer on duty to prevent the rioting that took place in an inauguration ceremony. The police made 17 arrests but due to lack of proof court had to acquit 2 to 17 of the accused but the appellant was the one who had put the gun on the police officer hence, he was convicted by the session judge for the offense of IPC 307 and IPC 353. However, the High Court acquitted him of both charges. For section 307 the court held that the accused held the gun but did not open the fire hence, cannot be held guilty of the offense as per illustration (C) of section 307 of the IPC. Furthermore, the accused had no ulterior motive to harm the police officer as they had not met each other before this incident.  And in the offense of IPC section 353, the court held that because the appellant was acquitted from the other charges of rioting and unlawful assembly, etc. Thus it is not right to charge for IPC 353. The court reversed the conviction and said that the mere act of pointing a gun at the police personnel is not sufficient to punish the appellant.

In the case of Jayaseeli vs State, the accused was tried for offenses under section 353, 294 (b) 427, and 506 (ii) of IPC. However, she was acquitted from the charges of sections 294 and 506(ii) of IPC. She was convicted under sections 353 and 427 of IPC with the punishment of a fine. The fact of the case was that the accused stopped the public servant from performing his duty. The complainant was to survey the land on the instruction of Deputy Tahsildar and the accused used foul language at the surveyor who was doing the work assigned. She tore the settlement book and measuring tape of the complainant and due to which he could not complete the work assigned. And the court read through the definition of section 353 and concluded that the evidence on record and the legal principles of the apex court the ingredients of the section could not be made, because the prosecution could not establish the intention of the accused committing the offense.

Therefore, from both the judgment we see that the intention of the accused could not be proved due to which the court had to acquit the accused from the charges of 353. Every criminal act is followed with an intention and when there is no intention it cannot be construed as an offense under IPC to punish the accused.